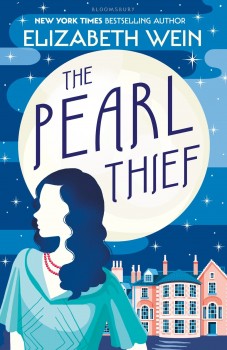 Julie Beaufort-Stuart’s ancestral home has been sold and is being turned into a school. Her family’s treasures are being catalogued ready for auction, but then the archivist disappears and Julie is attacked.

Sixteen-year-old Julie Beaufort-Stewart arrives back in Scotland early from her Swiss boarding school. Her trunk is lost somewhere in transit and she only has the clothes she’s wearing. Her family aren’t expecting her so soon, and her grandmother’s house in Perthshire is in an uproar. The house has had to be sold to pay her dead grandfather’s debts and is in the middle of being turned into a boys’ school. Her family are there to supervise the removal of the last of their possessions and there’s an archivist up from London who is busily cataloguing the remaining family treasures ready for auction.

There are tensions on the Strathearn estate between the builders and the McEwen family, Highland travellers who have been visiting the river bank for generations and fishing there for the rare and extremely valuable freshwater pearls. Their presence isn’t welcomed by either the builders of the local water bailiff, a man who’s quite happy to dispense his own brand of rough justice to anyone who gets on the wrong side of him.

When Julie gets hit on the head and knocked out while walking by the river and the archivist also disappears, suspicion naturally falls on the McEwens but Julie can’t believe they would do anything to hurt her, even though she has no memory of anything before waking up in a hospital bed. Matters are complicated further when Julie realises that a hoard of the valuable pearls have gone missing from the family treasure.

The Pearl Thief is set the year before the outbreak of the Second World War. Smoking is something everyone does, and it’s easy for the authorities to turn a blind eye to Julie’s mother fudging her daughter’s age so Julie can take a driving test in her sports car. Julie – Lady Julia, to give her the correct title – is charming, headstrong and utterly likeable. She desperately wants Ellen McEwen, a Traveller girl of her own age, to like her and be her friend, and the developing relationship between the two girls is, like the rest of the book, a sheer delight.

The mystery of the attack on Julie, the apparent suicide of Hugh Housman, the archivist, and the disappearance of the Strathearn pearls develops into a fascinating whodunnit, evoking Golden Age crime fiction at its most engaging. The book is as delicate and entrancing as the pearls it so lovingly depicts. The story of the threats to the mussel beds mirrors the threat to the Travellers’ ancient way of life and Elizabeth Wein brings her research vividly to life. It’s no exaggeration to say I enjoyed every minute of this book.