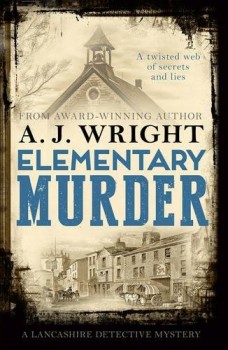 A would-be teacher is found dead inside a locked classroom. DS Michael Brennan suspects her death is not the suicide it seems.

Wigan is hardly the most appealing or romantic of settings for a murder mystery – and it is to AJ Wright’s credit that he turns this unlovely steel and mill town into a key player in this second story in his atmospheric and compelling series. His descriptions of the near-poverty, drunkenness, brutality and abuse at the turn of the 19th century paint as grim a picture of Lancashire working class life beneath a permanent cloud of coal-fired smog from the factory chimneys as is possible.

It is against this background that Detective Sergeant Michael Brennan – the creation of a specialist detection department still new and largely unproven – must carry out his business.

When a candidate for a teaching vacancy at George Street Elementary, one of the town’s ‘problem’ schools, is found poisoned inside a locked classroom with a note by her side, suicide looks the obvious answer.

His ex-Indian Army chief constable wants the case closed quickly and quietly. But Brennan’s instincts and his dislike of coincidence tell him there is more to this than meets the eye. As more deaths follow – and a ten-year old pupil from a troubled family background goes missing – he uncovers a staffroom with plenty to hide. Aided by the scowling Constable Jaggery, Brennan faces a surprisingly complicated and intricate investigation.

Brennan is a straightforward and likeable protagonist. The locally-born son of an Irish Catholic mason, his heritage and his job make him doubly an outsider. His stable home life, happily married and with a young son he adores, sets him apart from most of the mill and steel foundry workers and he is never quite accepted by the town’s more prominent citizens, secure in their cocoons of Victorian hypocrisy. Jaggery, hardly the brightest star in the police firmament, is at his best – a real, old-fashioned beat copper, always up for a pie and a pint and not averse to using his fists to enforce the law in rougher areas.

Wright, a former English teacher, who was brought up and lives near his book’s setting, evokes strong images of both the town and its people in a perfectly recreated late-Victorian setting. His characters are developed with a great eye for detail. From his protagonist, whose background gives him a perception and sympathy unusual in a Victorian policeman, to the stuffed-shirt professional classes who believe their education and position qualifies them to pass judgement on their social inferiors, all are eminently believable.

This is a clever and intricately plotted story, very well-written and with enough red herrings to satisfy the most demanding of mystery readers.