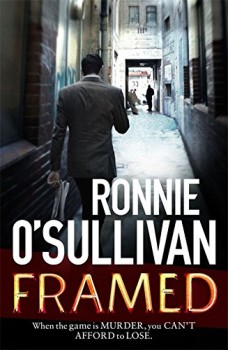 Snooker hall owner Frankie James sets out to prove his wild younger brother’s innocence of a gangland murder and must face the police, gang bosses and warped killers.

When I was a teenager, London’s snooker clubs were places you stayed away from if you valued your wallet or your health. Most were little more than ‘drinkers’ for the local criminal fraternity. The only women you found there were barmaids, ‘brasses’, or both! Then along came a smart boy from a Dagenham council estate. In the early 1970s accountant Barry Hearn bought a hall in Romford as a property investment, then somehow convinced the BBC to screen the game.

It took off, propelling Hearn to his first million. Its stars like Steve ‘Boring’ Davis, the intense Scot Stephen Hendry, and others soon became household names. But behind the rather prim TV coverage, where the players were often portrayed as little more than extensions of their cues, there was still a wilder world. Booze, then increasingly drugs, began to play a part.

Then came five times world champion and multiple title winner, Ronnie ‘The Rocket’ O’Sullivan. A childhood snooker prodigy, his father and Sicilian mother ran a string of Soho sex shops until his father was jailed for murder. O’Sullivan was never afraid to show emotion at the table and together with his rapid style of play and sheer ability, began to dominate the game. He has won more than £8 million, despite a mercurial temperament and ambivalent attitude to snooker, from which he took prolonged sabbaticals and repeatedly threatened to quit, citing staleness and a desire to pursue other interests.

The result of his latest break is a brilliant, brutal and authentic debut crime novel, set in 1990s Soho and based around the game and area he knows so well. How much is down to his own experience, or those of his fellow players, is open to dispute, but his portrayal of the sordid reality of the period is accurate beyond question.

Frankie James has problems. His mother disappeared when he was 16; his father is in jail for armed robbery; he owes rent on his snooker club to one of London’s toughest gangs, who are themselves involved in a vicious turf war. When his wild younger brother turns up at the club, covered in blood, and with the police close behind him seeking his arrest for murder, Frankie must face up to a promise he made to his mum to keep his brother out of trouble. He has tried all his life to avoid involvement with serious crime, but now has no choice but to enter a world of police willing to accept the conveniently obvious to secure a conviction, ruthless gang bosses and warped sadistic killers.

O’Sullivan writes about a world he knows and his often vivid prose show all the assuredness, drama and dash he brought to the green baize table. Some readers may be offended by the frequent and casual use of swear words, but in the dark world Frankie inhabits they are as common as breathing – or being hit round the head with a cue!

Frankie James is a likeable paradox. Somewhere there’s a nice guy trying to get out from under his heritage and his weaknesses. As for The Rocket, this is a 147 maximum clearance.