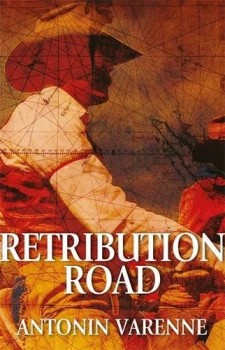 East India Company Sergeant Arthur Bowman is sent on a secret mission. Years later as a drink and drug addicted policeman, he stumbles on a vile murder and knows only someone who shared his Burmese prison could have committed the crime.

Only a Frenchman or a Russian could even have attempted this sprawling epic, stretching over almost 20 years and three continents which recalls the work of those great adventure writers Conrad, Kipling, Stevenson and Haggard. Antonin Varenne will be a new name to most readers, but one to note.

This flamboyant adventure features lost soldiers who have plunged into the heart of darkness and will cross the world in search of vengeance and redemption. It is powerful, shocking and even unsettling, posing as it does serious questions about both manipulation by multi-national companies and male violence.

In 1852, when the story opens, the East India Company is effectively the British Raj. Founded by Elizabeth I, the private company is now so powerful it is the only law and government in vast swathes of Africa, India, Burma, Siam and China. Its private army of 300,000 British mercenaries and native troops enforce its will. Rebellion is ruthlessly put down with massacres commonplace.

Sergeant Arthur Bowman is the perfect senior NCO. Give him an order, he will carry it out. He’s physically tough, fearless in combat, and dominates and leads his men by sheer force of personality. No one crosses Bowman. He is selected as second-in-command of a unit of troublemakers and criminals for a secret mission during the second Anglo-Burmese War. It fails and he and his surviving men are captured and hideously tortured. Throughout their ordeal, ‘survival’ becomes Bowman's mantra, a word that will stiffen their powers of endurance. But only ten survive.

Years later, now a Thames Division policeman, battling his ghosts through a haze of alcohol and opium, Bowman discovers a mutilated corpse in a sewer bearing the same marks of torture and with that one word daubed in blood beside it. Bowman is convinced the killer is of those who shared his captivity, and resolves to hunt him down. As he eliminates the survivors, he also discovers that his wartime unit does not exist and that no one was meant to survive in a carefully organised cover-up to a plot by the East India Company’s powerful directors to enrich themselves.

Himself a suspect in the sewer killing, the single-minded Bowman realises he must find the killer to prove his own innocence. A trail that begins in the Burmese jungle takes him through the slums of London to America at a time when, in a bid for mineral riches and land, the conquest of the West has begun. More similar murders follow.

This magnificently brutal historical epic is part war story, part crime novel, part western, part serial killer thriller and part an intimate psychological character study. It is a story of greed, retribution, redemption, forgiveness, the driven search for a disturbed killer and one of the best descriptions of what it is like to live on the edge between life and death I have ever read.

This amazingly researched and detailed book vividly captures the different countries in evocative descriptions of places and details. London and the Thames in ‘The Great Stink’ of 1858; the laundries and opium dens of China Court; the filth and poverty of ordinary people; the trials of an Atlantic crossing; the betrayal of idealist dreams of America with strikers shot and those hoping for ‘Utopia’ cheated and ruined by corrupt officials; slavery; the treatment of the native Indians; American ‘justice’; and finally the Civil War.

As the ghosts around him multiply, Bowman encounters pioneers, farmers, prospectors, soldiers and Indians on a journey that tests this mentally and physically scarred man to his limits, but gradually sets him on the path of profound change. Above all it is a story of how much the human spirit can endure when even hope seems lost. Bowman is the anti-hero of them all. Cold, callous, brutal at the start, reduced to an emotional wreck by the horrors he has seen and the things he has done, he slowly becomes more ‘human’ – although often it’s difficult to tell – aided by some of the people he meets and the French woman with whom he falls in love.

The writing is at times sublime, with vivid descriptions of the sheer expanse and variety of terrain of America taking the edge off some of the more unpleasant parts of what is a truly compelling and  brilliantly characterised narrative.