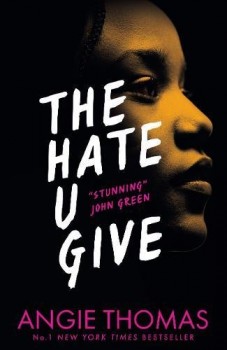 The Hate U Give

Sixteen-year-old Starr is the only witness to the shooting, by a police officer, of her friend Khalil, a killing that comes close to tearing her neighbourhood apart.

Starr is 16. She lives in a poor, predominantly black area of the city, but goes to school in a posh, white suburb, nearly an hour’s drive from her home. Her parents – her mother is a nurse and her father runs a convenience store –  want her to have opportunities outside the ghetto area where she was born and has been brought up. So Starr and her brothers live two very different lives, one at home and the other at school.

Starr is no stranger to violence. It happens all the time in their home neighbourhood and, when she was ten, Starr held her best friend’s hand as she died, the victim of a drive-by shooting. When a party she shouldn’t really be at is broken up by shots being fired, Starr leaves with her best friend Khalil, not expecting the same thing to happen to her again.

But it does. Khalil is pulled over by a white police officer and asked to get out of the car. Moments later, he’s dying from gunshot wounds. The police officer claims he believed Khalil had a gun in the car, but Starr knows that’s not true. But as she’s the only witness to the killing, it’s her word against that of the policeman and there are no prizes for guessing who is most likely to be believed.

The Hate U Give is a stunning, massively powerful young adult debut from Angie Thomas. She writes with absolute authenticity about a world that is very different to anything the vast majority of readers will have ever experienced. This is a world where police officers are to be feared, where pitbulls are kept in the backyard for protection and where rival gangs hold sway over the neighbourhood. And this is a world that is a reality for black youngsters throughout the US – and yes, in parts of the UK too. But in the US, the ready availability of guns makes volatile situations vastly more dangerous than they are in the UK, although incidents such as the death of Mark Duggan in north London prove such things aren’t unknown here, either.

Thomas’s characters are vibrant and at times challenging, but they are at all times real. Starr has to cope with the problem of having a white boyfriend that her father does not know about and would not approve of, as he’s made his views on interracial couples quite plain. She’s been brought up on the history of the Black Panthers, whose original purpose was to prevent acts of police brutality, but it soon becomes all too clear that there will be far reaching consequences from Starr having to testify about the shooting in front of a grand jury, and it’s not easy for her and her family to stand by their beliefs and principles.

The sentence structure and cadence of much of the narrative is at the same time unfamiliar but lyrical. The depiction of gang culture will take you deep into an unfamiliar world, but it will also make you question your own beliefs and prejudices.

The Hate U Give is one of those rare books, one that will stay with you long after you’ve turned the final page and, far more importantly, it’s a book that will change the way you view the world. Seeing life – and death – through Starr’s eyes is at times heart-breaking and at other times uplifting. I was absolutely engrossed in her story and that of her family and friends.