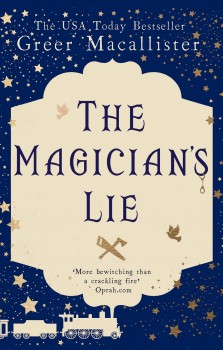 The Amazing Arden, the most notorious female illusionist of her day and renowned for sawing a man in half, is questioned by a small-town policeman over the apparent murder of her husband.

This is an amazing and riveting tapestry of mystery, magic, lost love, betrayal and evil. And it is historical fiction like you have never come across before – a wonderfully written murder mystery wrapped in a cloak of conjuring tricks and sleight of hand. Set around the turn of the century in various American towns and cities, it is the tale of the Amazing Arden, the most notorious and famous female illusionist of her day, renowned for sawing a man in half.

In a small Iowa town, with policeman Virgil Holt among the audience, she swaps her saw for a fire axe. After the show, the body of a man believed to be her husband, axed to death, is discovered among her props in the coffin she uses in her act. The illusionist herself has disappeared. On his way home, Holt crosses her path and arrests her. Seeing a chance to rescue a career threatened by a line of duty injury as well as his marriage, he takes her to his office to begin an interrogation.

Arden insists on her innocence and during a long and eerie night reveals her near unbelievable but spellbinding, life story. Even under restraint, the beautiful magician is far from powerless and Holt, a deeply uncertain man with an inferiority complex, must somehow try to discern the truth through a maze of smoke and mirrors.

To reveal more would be to damage the readers’ enjoyment of a wonderfully plotted, suspenseful, compelling, beautiful, frightening, evocative and above all, magical story which marks Macallister as an exciting new voice in historical fiction. Her tale of the tragic yet self-possessed and confident Arden will make you question how truth can appear different from fact, and how feelings can be stronger than logic.

Cast in glittering prose, with a cast of complex, compelling characters and a strong historical background and period feel, this is a story you will not forget quickly. By the surprise ending you will be left wondering what is real and what is illusion. The addition of real life characters and events makes this story even more fascinating.

Arden’s sponsor is the ‘Queen of Magic’, Adelaide Herrmann, who herself arrived in New York as a dancer, before becoming assistant to her husband, magician Alexander, ‘The Professor’ or ‘Herrmann the Great’. When he died in 1896, she continued the show, becoming a star in her own right as the only woman ever to perform the famous bullet catch trick at the Metropolitan Opera House in Chicago just a month after his funeral. Her presence adds to the authenticity of what is an almost bardic tale of a woman’s journey of self-discovery and her continuing battle to escape her past.

Arden is such a compelling character with her beauty, her ‘fairy’ two-coloured eye, her self-control hiding a deep-seated fear which makes her appealingly vulnerable, that you will want to believe – as Holt does at times – in her innocence. Is she telling the truth or is it another carefully constructed illusion? This is a book which is best described in two words – totally magic!