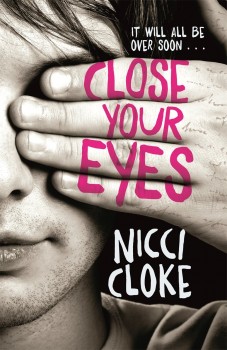 No one could have predicted the tragedy that would strike Southfield High School, when a pupil goes on a rage-filled rampage with a gun. Or could they?

Southfield High School is just like any other school, and at first sight, the six teenagers at the heart of the book are pretty much what you would encounter in any school. The core of the group is made up of twins Aisha and Ash, flirty Gemma and Remy, who is sporty and fun. They’ve known each other for ages. Ash is hard-working and thoughtful, protective of his sister and generally a really nice lad. Aisha and Gemma are more interested in boys than studying, but are bright enough to do well in their lessons. The group widens to admit two newcomers to Southfield High: Elise and Elijah. Elise is pretty and smart, Elijah is quiet, and harder to get to know.

Close Your Eyes opens with a transcript of a 999 call. There’s been a shooting at a school and a teacher has managed to call for help, but at that stage, her fate is unknown. So from the start, we know that something tragic has happened, but not the full scale of what’s gone on. The identity of the shooter is unknown at that stage, and this only emerges gradually as the book unfolds. The story switches from prose to text conversations, to interview transcripts with both students and teachers, providing an ever-changing picture of the pressures facing the various members of the group.

The teenagers are a varied group, and Nicci Cloke does a good job of giving them all distinctive voices and personalities. They’re not stereotypes there to make a point, they’re real kids with real lives and it’s easy to care what happens to them. Each of them has a different perspective on the events that led to the final, fatal confrontations in the school. Each of them feels in some way to blame, looking back on what happened and wondering if they had somehow contributed to the tragedy by their own acts or omissions.

The level of bullying in schools is thrown into sharp relief. It happens in the classroom and on social media and, in many ways, Close Your Eyes presents a stark and at times unattractive picture of teen life, where one unfortunate photo or video can go viral on Facebook, Tumblr and Twitter, with the potential to ruin someone’s life. In a digital age it’s harder than ever to keep secrets, and it seems it’s equally hard for schools to put a stop to bullying.

There’s plenty of clever misdirection, with Cloke holding back the all-important fact of who carried out the shooting for longer than I would have believed possible. This is a story of how friendship are made – and how they can be so easily broken. I was thoroughly engrossed in the lives of the teenagers, as the book hurtled towards the tragedy that had been signalled at the very start.

But in the tradition of the classic Greek tragedies, it’s not what happens that matters, it’s how it happens that holds the audience entranced. Close Your Eyes is a book that will worm its way under your skin. You’ll laugh with the group and ultimately cry with them, and like them, you’ll wonder what could have been done to prevent the tragedy that gradually but inexorably unfolds.