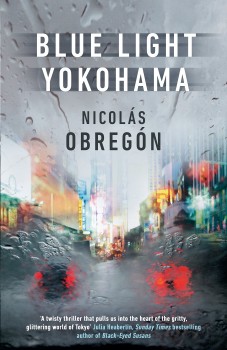 A young detective assigned to the murder of a Korean family on the outskirts of Tokyo uncovers links to other deaths where the killer left the sign of the black sun.

Inspector Kosuke Iwata returns to duty after a 14-month break, taken for personal reasons. He is immediately assigned to the case of a Korean family of four, butchered in their own home. The killing has ritual elements, and although preliminary enquiries turn up a few suspects, none seem to fit.

A complication is that Akashi, the original detective assigned to the case, has recently committed suicide, and the trail has gone cold. Moreover, the attention of Tokyo Metropolitan PD is focused elsewhere – in particular on the problems of a young starlet. Iwata and the attractive Assistant Inspector Sakai are working practically unaided. The two officers are, however, highly motivated, and another death with the same ritual elements provides a key.

The investigation provides plenty of interest, with Iwata and Sakai exchanging little by way of verbal communication but with an immediate bond providing a bulwark against their foes: a Machiavellian criminal, and a deeply corrupt TMPD. The investigation takes them across Tokyo; the sheer scale of the city and the futuristic horror of an alienated population living in an artificial machine comes across very vividly.

Iwata himself is a complex and tortured character. His wife is in a mental institution, for reasons only explained towards the end of the book. A period in the US explains his American wife, and also the prejudice he suffers from his xenophobic colleagues. His childhood in an institution is slowly revealed, but hinted at from the beginning by the use of italicised lines from a song lyric, a haunting reminder of his mental state. This device is, however, rather prolonged and does get a little wearing.

In a postscript, the author explains how the novel was inspired by a real case, which to date has not been solved, and he mentions that even after more than a decade, 40 full-time officers are still assigned to it. This highlights one of the problems with the plot: that such a multiple killing would be left to two officers, both with question marks against them, and that the senior of the two could swan off to Hong Kong for the best part of a week on a hunch, as he does.

Still, if you can suspend disbelief as regards policing, the only question is your enthusiasm for the principal showing the usual combination of a cold and capable capacity for gory deeds and a lunatic philosophy which makes very little sense. The villain of the piece here certainly satisfies the requirements in both respects, enough to have your correspondent quaking under his blankets. There are plenty of chills and thrills in this accomplished first novel.