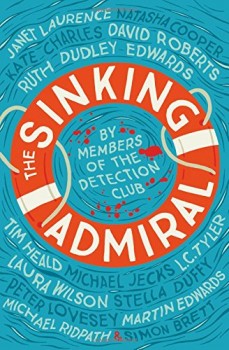 by The Detection Club

Admiral Geoffrey Horatio Fitzsimmons, landlord of a failing coastal pub, is found dead in his boat, an apparent suicide. Bar manager Amy Walpole refuses to believe the obvious and sets out to investigate.

Eighty-five years ago, 14 members of the original Detection Club got together to break new literary ground with a collaborative work published as The Floating Admiral to help pay the running costs. It was a huge success, with two reprints, the last as recent as 2011. The ‘Certain Members’ of the club, who each contributed a section according to strict rules devised by Dorothy Sayers, included stellar names of the world of crime fiction in its golden age, such as Agatha Christie, Sayers herself, Freeman Wills Crofts, Clemence Dane and GK Chesterton.

Now, under the editorship of the club’s outgoing president, writer and broadcaster Simon Brett, 14 modern members have come together to pay homage with what, at least in title, is a direct successor. Under amended rules to take account of the changing face of Britain, homage it is – with the names of every one of the original authors appearing in some form. They have successfully remodelled what was a unique game of literary consequences, producing an original, ebullient and archetypal whodunit that will keep readers guessing.

The Admiral of the title is a pub in the bleak Suffolk seaside village of Crabwell, named after Admiral John Byng, shot on his own quarterdeck in 1757 for failing to prevent Minorca falling to the French, which prompted Voltaire’s quip in Candide that the British shoot an admiral from time to time “pour encourager les autres.” It is also the nickname of its bluff, but mysterious, landlord, Geoffrey Horatio Fitzsimmons, a man with a somewhat dubious and much exaggerated past – and also the name of his dinghy, the only solid link to his fabulous sea-going career.

Pub, landlord and dinghy are hardly in ship-shape condition. He is near broke, the pub is suffering the fate of so many country public houses hit by cheap supermarket drink sales, falling custom and costs of upkeep. The boat too could do with some work.

Tempers in the village are already on edge due to other problems typical of a small coastal community. The centuries old church is set for closure, there are few employment prospects, even tourism is minimal due to its isolation. Into this depressed atmosphere drops an infamous and muck-raking reality TV presenter and his cameraman, allegedly filming a documentary on the decline of the local, but in fact looking for people to embarrass.

The villagers, all desperate for their five minutes of fame, flock to the magic lens and even landlord Fitz suddenly cheers up, launching his ‘Last Hurrah’ party and bullishly predicting a bright future. The following day he is found dead in his tethered boat, apparently with a suicide note near his body. At least one of the authors must know Suffolk police – the original ‘Swedey’ – well. From bitter experience, I can say he or she has them off to a T! But stubborn bar manager Amy Walpole does not believe this was a suicide and alternately charms or dragoons the self-centred TV presenter into helping her own amateurish investigation.

There’s lots of blank walls, lots of false trails and lots of secrets waiting to be exposed. It’s a good, old-fashioned story from the 1930s brought bang up to date by 14 competitive writers – who apparently will stop at nothing to save a good traditional pub from going under! It’s hugely entertaining with the different authors all adding texture with their individual styles – what you might call something entirely different. It may not have the huge sales success of its predecessor, but it is an ideal book to amuse you on a relaxed holiday, lying by the pool with a glass – or two – of wine!