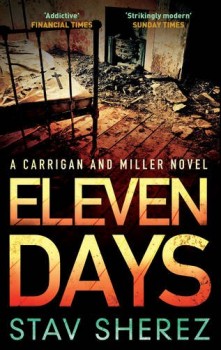 DI Carrigan and DS Miller are assigned to investigate a fire that has gutted a small West London convent. The bodies of all ten nuns are found inside, apparently willing victims as they have made no attempt to escape. Then an eleventh body is discovered and what began as a fatal mystery becomes a full-scale murder.

DI Jack Carrigan and DS Geneve Miller once again lead the reader into London’s lesser known corners, those of little-known communities and dark, complicated histories, in this beautifully written, politically aware and often unsettling book, which shines a hard light on 21st century crime and the tortured modern history of the Catholic church.

But this is no Dan Brown imitation. The horrifically awful back story is related in an almost evidential manner that makes the facts all the more shocking and sharply focuses attention on the detectives’ ability and determination to solve what appears an almost pointless mass murder.

Set just a few days before an unusually white Christmas, Carrigan and his sergeant are assigned to investigate a fire at a small West London convent, home of a little-known order, the Sisters of Suffering. The corpses of all ten nuns are found around the dining table in a locked room – apparently willing victims – but when an 11th body is found in a basement confessional, mystery becomes mass murder.

Carrigan’s hardline boss wants a result before the approaching holidays – and makes it clear almost any will do as long as the church cannot be criticised. But as the team dig into the order’s often controversial history and community work, they meet a studied and carefully orchestrated resistance from the local diocese and also uncover a running battle between the sisters and a gang of Albanian girl traffickers and drug runners.

The Catholic church, its archaic and labyrinthine protocols, scandals both sexual and financial and perceived unwillingness to bend or change, has become a happy hunting ground for crime and mystery writers. Sherez has avoided all the obvious lines, choosing to focus on the little-known issue of liberation theology and its manifestation in the banana republics of South America, where priests and nuns encouraged worker activism and in some cases took up arms against what they saw as the oppressors of the poor. He tackles a provoking and controversial subject, which the church still is not willing to debate, with sympathy and an impressive skill so that it slots easily and naturally into his narrative.

There is one complaint, though, on minor matters of factual accuracy. There are no assistant chief constables in the Met – the rank applies only to constabulary forces – and what is an SDI? It’s not a rank or title I’ve ever come across.

Eleven Days boasts a clever, multi-layered and compelling plot, whilst Sherez is gradually developing the characters of Carrigan and Miller, and their emerging personal stories enhance both reader involvement and the reality of what is a superbly written, intelligent and captivating crime novel.

Sherez is rapidly staking a claim for a place in crime writing’s top tier. The book is at times dark, but is never  unnecessarily violent. Its scene setting is evocative, the characterisation is masterful, and there is a sense of pace and above all, real believability, that will further establish his protagonists as popular favourites in what looks to be becoming an outstanding series.