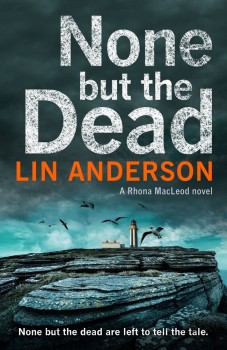 None But The Dead

The discovery of symbolic muslin roses and the unearthing of a human skull are the forerunners of a series of events that will rock the community of far-flung Sanday in the Orkneys and will lead to the arrival of Dr Rhona MacLeod, a forensic expert and other mainland police officers.

While renovating an old school, on Sanday in the Orkneys, Mike Jones, a newcomer to the island, finds a series of muslin roses in his attic. The disturbance of these totems is viewed as inauspicious by many of the islanders, a feeling that is reinforced when a body is unearthed in the playground of the school. The discovery of the body leads to the arrival of the mainland police, then the skull is stolen, a child goes missing and the body is discovered to have died recently enough to merit police investigation.

As the investigation proceeds, more and more secrets are uncovered. Suspicion relating to the various incidents become complicated and is made more convoluted by the reactions and interactions of the investigating officers.

The atmosphere created within this book is exceptional. The star of the show is Sanday itself as well as its changeable weather, which is described with such clarity and personality that it almost becomes one of the main characters. As I was reading the book, sitting in a window on a chilly cloudy day, I felt warm and snug, as compared to the tempests that were besting the protagonists in the novel.

At the start of the book I found that the cast of characters was too big. I was confused between who each of the police officers were and had to keep checking back to refresh my memory. By halfway through the book, this was no longer an issue and I wonder if I would not have had this problem if I had read earlier books in the Rhona Macleod series.

If this is the case then I would recommend reading earlier ones before trying this book. That said, I really enjoyed the plot and the interrelationships between the main characters. The final scenes were described with cinematic clarity and I found the ending very satisfying.