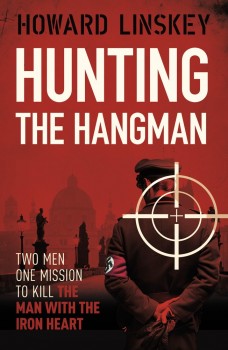 A few thousand soldiers from the defeated Czech army made their way to Britain. Now their President in exile wants two of them to return to Czechoslovakia to undertake a special mission from which they are unlikely to return.

The events described in this book take place three-quarters of a century ago and, though they have been well documented since, there may still be many people unfamiliar with them. Obergruppenfuhrer Reinhard Heydrich, Reichsprotektor of Bohemia and Moravia and Chief of the Reich Main Security Office, was Himmler’s deputy. He was also widely regarded as successor to Hitler himself. If any one man could be regarded as responsible for the Holocaust it was Heydrich – the man who chaired the notorious meeting at Wannsee at which the ‘final solution’ of the Jewish question was promulgated. Known even to Nazis as ‘the Blond Beast’, he was hated in occupied Czechoslovakia.

Eduard Benes, Czech President in exile in England, announces his intention of making an attempt on Heydrich’s life and asks Moravec, Head of the Czech Secret Service, to find volunteers to undertake the task. After careful consideration of the most likely candidates, the choice eventually falls on Josef Gabcik and Jan Kubis, two of the few thousand soldiers from the defeated Czech army, who made their way to Britain. Both of them accept that there is little chance of their escaping after the assassination. From a purely historical point of view, it is worth noting that there is no suggestion that the assassination is intended to stir up rebellion against the regime or to accomplish anything other than the death of Heydrich.

It was expected that the assassination would take place within days of the two men landing in Czechoslovakia. In fact, as the book makes clear, it was by no means obvious how and where Heydrich should be killed and it was six months before an attempt could be made. In terms of the effectiveness of the novel, this leads to a rather slow mid-section in which little or nothing happens. However, from an historical point of view, this is what actually occurred, as, in fact is everything else from the point that Gabcik and Kubis launch their attack. Whether this was because, as rumour had it, Heydrich was due to leave the country on the following day is unclear. What follows could almost be fiction, the excitement being intense, but the events in the St Cyril and St Methodius Church are well attested and the thousands of people who continue to treat it as a place of pilgrimage are further testimony to its truth.

One aspect of the book that is somewhat disappointing is the failure to consider whether the assassination should have been attempted in the first place. As the author himself admits, Benes always denied that the initiative was his, placing the responsibility on the shoulders of his Chief of Czech Secret Service, but clearly the author did not believe this and writes a chapter in which Benes actually orders that it be done. However, that chapter did not contain the rationale for the assassination attempt. Though Benes later maintained that he expected an uprising that failed to materialise, there is no suggestion of this in the novel.  In retrospect, considering the horrors that took place subsequently – which are well described in the novel – it is possible that it might have been better not to have undertaken this mission at all.