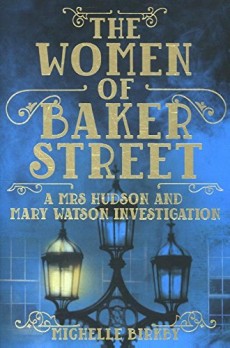 The Women of Baker Street

Holmes’ landlady, Mrs Hudson, is in hospital, and thinks she sees a murder, but cannot be sure. Dr Watson’s wife Mary investigates a number of missing young boys. Gradually the two inquiries are drawn together and their lives are put in danger.

It had to come! With all the manufactured hysteria surrounding the dreadful TV series and an army of Holmes imitators trying to cash in growing by the day, it was only a matter of time before someone turned their attention to the ‘wallpaper’ of Conan-Doyle’s originals and discovered that two women received occasional mentions.

The redoubtable landlady/housekeeper Mrs Hudson – other than one mention of her ‘queenly tread’ – has no physical description or first name, although Holmes’ fans have identified her with ‘Martha’ in His Last Bow. Now she is transformed into a former property magnate with several houses in the better parts of London, a widow who has also lost her only son – and a proto-feminist. Her ripping off of Inspector Gregson at one point could hardly have been bettered by Germaine Greer! She is also the narrator of this unlikely tale.

Mary Watson, née Morstan, was the wife of Dr John Watson, and was rarely involved in her husband’s partnership with Holmes. She first appeared in The Sign of Four, where she was a central character, and Watson refers to her in a number of other stories. Michelle Birkby’s Mary is an intelligent, inquisitive and often impulsive young woman with a strong social conscience and desire to help those less fortunate.

These are the all-too-modern versions of the Women of Baker Street, contending with the rather more famous occupants of 221b to put a feminist slant on the business of crime detection in Conan-Doyle’s gas-lit, atmospheric world of crime and adventure.

But Birkby’s updating brings other problems. Around the turn of the 19th century, it is doubtful, despite their friendship, whether Mesdames Hudson and Watson would refer to each other by Christian names, even in private. Mrs Hudson would never have introduced Mrs Watson to a boy as ‘Mary Watson’ or called the good doctor ‘John’. Even Holmes refrained from such a breach of etiquette during their long association.

And in the matter of manners, no woman of a certain class would ever swear in normal conversation and any boy who used the word ‘bastard’ in front of two women would have had his ears soundly boxed!

Yet despite these quibbles from a die-hard Holmes traditionalist, this is a convoluted and clever, if slightly improbable, drama of obsession and madness. Birkby, who read her first Holmes story at 13, got the idea while in hospital, suffering as her Mrs Hudson does, from serious stomach problems.

Dr Watson has managed to get her in to a private ward at St Bartholomew’s, but while in a stupor recovering from her operation, she believes she sees the murder of another patient. Was it a drug nightmare induced by morphine, or horrific reality? As her recovery continues she becomes aware she is surrounded by women who all have secrets to hide – and also that the number of deaths in the ward is particularly high.

Meanwhile, Mary Watson is investigating stories of young boys going missing, determined to find them and reunite them with their families. Trying to discover the truth, she comes across rumours of the dreaded ‘Pale Boys’, a group of ghostly spectres who bring death to those who cross their path. Gradually the two investigations are drawn together, until a dreadful discovery in Regent’s Park leads to a climax in the dark and fog of Villiers Street, leading down to the Thames at Charing Cross.

The two principals are surrounded by a wonderful supporting cast. All the familiar names are pressed into service – Inspectors Lestrade and Gregson, Wiggins and his gang of Baker Street Irregulars. They are joined by cameos of Holmes and Watson, a fascinating former courtesan with her tales of high society scandals and some of her former lovers, plus a new addition to the Baker Street household. Mrs Turner, the mother of one of the missing boys, is brought in to help Mrs Hudson – and it can surely be no coincidence that in A Scandal In Bohemia Holmes calls his landlady by that name.

It’s not Holmes and if you’re looking for a re-run, you’re going to be disappointed. It is, though, a thoroughly enjoyable, cleverly written and shrewdly plotted Victorian murder mystery.