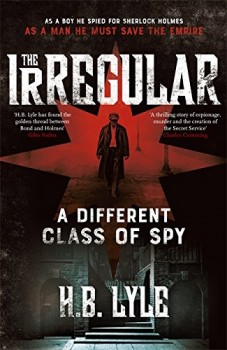 When a friend is murdered, Wiggins, once leader of Holmes’ Baker Street Irregulars, seeks revenge and becomes involved with Britain’s emerging security services.

The end of copyright on the character of Sherlock Holmes has seen more indifferent spin-offs than cases the Great Detective ever handled. Everyone, bar Mrs Hudson’s cat, has been pressed into the business of cashing in on Conan Doyle’s enduring phenomenon.

HB Lyle is the latest to join the rush. In a bid to find a golden link between Holmes and that other massive literary and film success James Bond, he introduces Wiggins, the former leader of Holmes’ Baker Street Irregulars. Twenty years on, Wiggins has fought through the bloody Boer War, is struggling to make a living as a debt collector, but still retains the street smarts and often illegal skills gained in his youth.

He is deeply affected by his South African experiences, particularly by the setting up of the first ‘concentration camps’ for Boer families, but still very much his own man, intelligent, observant, impulsive, violent, surly and with an unhealthy liking for the booze. This removes him from the Bond league – more Len Deighton’s Harry Palmer perhaps – but it does give the story a distinct flavour. Most of all, he has never lost sight of the lessons dinned into him by his mentor, or his sense of fairness, perhaps impressed on him by John Watson. Both make walk-on appearances, but are rather more memorable for their absence.

When a close wartime friend is killed by anarchists in the 1909 Tottenham Outrage, Wiggins promises the man’s widow revenge. His naive attempts lead to him almost losing his own life and he is only saved by the intervention of a mysterious Latvian woman.

Far away from the violent streets, Captain Vernon Kell, Britain’s first head of counter-intelligence, has his own problems. Germany is rapidly arming, Lenin is fomenting Communist revolution in Russia and across Europe, the Empire is under threat worldwide. He is also handicapped by politicians who will not take him seriously, opposition from the police and the inability to recruit agents other than public schoolboys from good families – soon exposed and who regularly turn up dead.

He asks his old friend Holmes for help – and is told there is no one better than Wiggins.

Their reluctant – on both sides – union seems to promise plenty of action and intrigue, an old-fashioned, escapist espionage adventure, along the lines of Buchan’s The Thirty Nine Steps.  Instead, what the reader gets is rather a ‘Holmes-lite’ story, with some well written and punchy action, a reasonable espionage element and plenty of shrewdly atmospheric period setting, with stark contrasts between the sooty slums of the East End London and the upper-class club life of government.

The romantic subplot never really convinces, and flashbacks, together with the inclusion of real events and real people such as Winston Churchill, often make the narrative a little disjointed and confusing. Doubtless Lyle will streamline tone and focus as the series progresses – this opener seems to be more in a visual, screenwriting format which has already produced a result with a TV adaptation in the offing.

Although the story stumbles once or twice, it has enough excitement, an excellent sense of time and place and an earthiness which set it apart as something a little different and fun to read and bodes well for Wiggins’ future, both in the secret service and on the bookshelves.

But I'm not sure it was really necessary to stress the obvious and give him a 00 identity prefix.