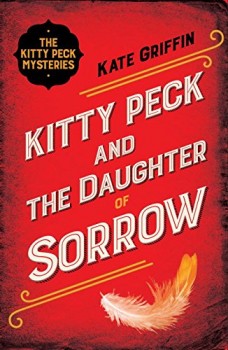 Kitty Peck and the Daughter of Sorrow

Kitty Peck has inherited Paradise, her grandmother’s sprawling criminal empire in the Thames docklands. But the past casts a long shadow and she must face a criminal cabal intent on her humiliation and destruction.

This third – and penultimate – Kitty Peck story provides an opportunity to remind the reader that the past can cast a very long shadow and that the pressure of events unnerves even the most determined.

By the sweltering summer of 1881, Kitty has morphed from a teenage seamstress, through a brief, but celebrated career as the Limehouse Linnet, a daring and risqué music hall performer, to Lady Linnet, East End crime boss and member of the fearsome cabal of Barons who run all organised crime in London and beyond. She has inherited Paradise, her grandmother’s sprawling criminal ‘manor’ in the shadow of London’s docks.

Every activity in the stinking, insanitary slum that is Limehouse, pays her one way or another. Drugs, prostitution, smuggling, sharking all pay her their dues. In return, the Lady is expected to protect as well as reward.

Kitty is determined to do things differently, but her own experiences and the shadows of the past weigh heavily on her. And she faces a challenge from a leading Baron, who for reasons of his own, seems determined to humiliate and destroy her –  and will use everyone she cares for to achieve his aim.

Unable to cope with the rising pressures Kitty turns to opium, the drug of choice of the East End, and the story opens with her being rescued from a den she owns by her friend, the homosexual scene painter Lucca. He is called back to Italy, to the bedside of his dying mother and she must face her problems alone, although the Lady is not without help from several of her grandmother’s trusted employees.

If the first half of the book is a little slow, as Kitty deals with her own guilt, doubts and confusion, the second bursts into whirlwind action, before a deliberately inconclusive ending. All will hopefully be answered in Kitty’s final adventure, The Parliament of Shadows for which this story, twisted, gripping, humorous, often macabre as it is, is but an appetiser.

What never changes with Griffin is her sense of place and timing. Her settings bring the action to life and her characters, however small a part they play, are all memorable – especially her villains.

There are some brutally horrific scenes which may shock the delicate. But it is Griffin’s unrivalled ability to portray a sense of threat and dread which permeates the whole story. You can almost feel the world closing in on Kitty with its cold, clammy, hand reaching for her throat. This is another superb step in what is proving to be a great series.