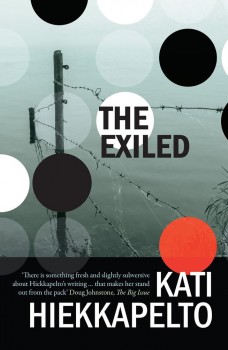 Finnish police officer Anna Fekete returns to her home town in the former Yugoslavia for a well-deserved summer holiday. But when her handbag and passport are stolen, she realises that there are other deep-rooted reasons why the Romany thief chose to target her.

The start of Anna Fekete’s well-deserved holidays turns sour as soon as she arrives in her home town of Kanizsa, also known as Magayarkanizsa, in northern Serbia, just a short car trip away from the Hungarian border. While enjoying wine in the company of old friends at the outdoor bar, she becomes a target of thieves; her bag with passport and credit cards is stolen. A quick chase after the thief results in her losing her way amongst the small streets, and meeting a strange Romany woman Judit, who appears friendly yet very cagey.

The police take a fairly relaxed attitude as the bag is found a day later, next to the thief’s body on the riverbank. A post-mortem on the Romany man confirms drowning so they have no reason to investigate further. However, the decision bothers Anna who’s convinced she’s also seen a small girl amongst all this commotion, and wants to find the potential witness. Her questions are left unanswered and mostly ignored.

Nearly everyone in Kanizsa remembers Anna’s father, a respected policeman who was killed during a mafia raid 25 years earlier, and they dismiss her concerns. She’s on a summer break after all. But Anna, now a Finnish police officer, starts a dangerous private investigation which threatens to hurt her family yet once more, and to destroy the delicate balance of past and present in the region damaged by recent wars and current refugee crisis.

Anna gets pulled into a murder case, against her better judgment, and against the advice of her mother who’s unable to express own grief, and against the cards that Judit read for her, as Anna doesn’t believe in premonition and fortune-telling. With reluctant assistance from the journalist Réka, her childhood friend, and a lovely young local detective Péter, she discovers corruption, lies and tangible evidence of human trafficking. The oppressive heat and incredible blue skies above magnificent raw beauty of the river Tisza symbolise many things in the lives of locals, welcome visitors, and refugees, as the atmosphere of fear and insecurity mixes with hope for normal ordinary life.

In her third book, Kati Hiekkapelto tells another excellent story as the gripping, engaging and heart-breaking Finnish Noir moves to the Balkans. Additionally, The Exiled represents the next level in creative development of both the author and her heroine. There is the subtle confident maturity: the writer who is not afraid to challenge the current political and social situation, and to rage about it in the most elegant literary manner, and the character who learns more about her roots and her personality, and ways to deal with the feeling of displacement.

The use of the Hungarian phrases and words adds the authenticity and the element of unknown, and also enables the author to perfectly show everybody’s mood. Huge credit goes to Hiekkapelto and the translator David Hackston who make the readers sweat in June’s heat as Anna Fekete fights her internal battle of being torn between two countries and cultures, and searches for professionalism, compassion and decency within her fragile homeland.