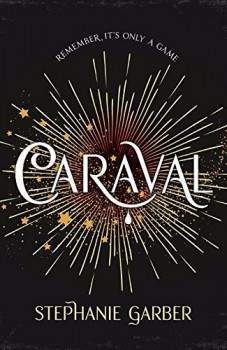 From a young age, Scarlett has longed to go to Caraval, a magical event run by the famous Master Legend. Scarlett wants her and her sister to escape from her cruel father. Eventually she gets her wish but things do not happen as she expects.

Scarlett and her sister Donatella live on the Conquered Isle of Trisda, daughters of the governor. Their mother had run away some years earlier and since that time their father has become increasingly cruel and controlling. Scarlett is engaged to be married to a count, who she has never met. She is pinning her hopes on this being an escape route for both her and for her sister.

Since she was a young girl, Scarlett has written every year to Master Legend, the owner and manager of Caraval, a festival of magic and hope. After a particularly brutal assault by her father, Scarlett receives the longed-for invitation but is afraid to a accept it in case it jeopardises her marriage plans. Donatella, much more adventurous, makes sure that they leave, helped by the handsome Julian. When they get to the Isla de los Sueños in a boat, Scarlett loses her sister and is accompanied by Julian.

She then enters a world of unreality, where nothing is at it seems, where normal rules do not apply, apparently. However, she encounters puzzles, excitement and brutality. She does not escape her past; it is there with her. She is forced to decide what she really wants and what she really believes in order to win the game and achieve the prize, a wish that will come true.

The book is skilfully crafted. It has elements of Alice in Wonderland, the Looking Glass Wars and aspects of the second book in Philip Pullman’s Dark Material trilogy. It is an alternative world where normality is replaced and decisions need to be made using alternative rules.

The characters are three-dimensional despite their fantastic setting. Scarlett’s dilemmas are shared with the reader. Julian is enigmatic; we want him to be good but it is just not clear. Other characters are deliciously bad, apparently, or generously helpful, but many of them are emotionally indifferent.

The pace of Caraval kept me reading for longer than I intended. The cover says that the film rights have been sold already. It’s not hard to imagine a very successful box office hit.