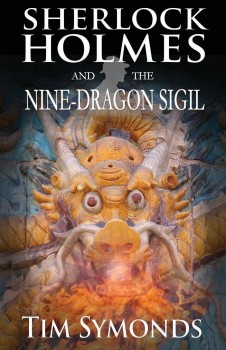 Sherlock Holmes and the Nine-Dragon Sigil

There are two schools of thought. One holds dear that Sir Arthur Conan Doyle’s Sherlock Holmes stories are sacrosanct and cannot, and must not ever, be tinkered with. Then there is Tim Symonds! He is an advocate of the alternative view and this gripping adventure story serves to confirm his mastery of the Holmes genre.

There is a classic Holmes quote from A Study in Scarlet (1887): “You know a conjurer gets no credit when once he has explained his trick” and, in a similar vein, it is difficult to review the book without giving too much away and spoiling it. However, if you enjoyed Sir Arthur Conon Doyle’s original Sherlock Holmes stories, then this book will be a treat for you.

The book is a well-crafted piece of historical fiction and involves Holmes and Watson in a plot in early 1900s Imperial China. The period and the geography are exceedingly well researched and perfect in every detail. The adventure is a combination of a cracking detective story and an Edwardian England/Imperial China period piece. The sounds, taste and smells of China flood the senses as if you were there as part of the story.

Symonds makes you feel that Watson is talking directly to you as he unfolds the story. The clues are all there but as Holmes might say, you see it all, but you do not observe. The distinction is clear and as Holmes said in the short story, A Case of Identity in 1892: “It has long been an axiom of mine that the little things are infinitely the most important.”

This book allows the reader to participate in unravelling the mystery of the nine-dragon sigil. The deductions made by Holmes in Symonds’ book are first rate. This is a cracking yarn and if you have ever enjoyed anything written by Conon Doyle then you will not fail to be impressed by this story.