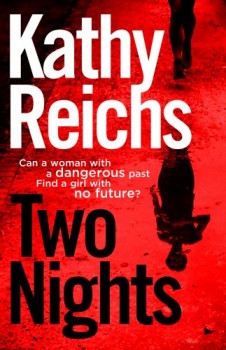 Sunnie Night is asked to investigate a bomb blast from a year ago and to hunt for a teenager missing since then.

After numerous books featuring forensic anthropologist Tempe Brennan, Kathy Reichs has taken a break from her famous creation and created a new series character, Sunday – Sunnie – Night. She’s a former soldier and cop, who now just wants to keep herself to herself, living on a small island with a squirrel called Bob for company. But a friend of hers, a man who helped bring her up, has other ideas. Beau wants her to meet Opaline Drucker a woman whose daughter and grandson were killed in a bomb attack.

The police investigation into the bomb blast has stalled, but Opaline Drucker wants the bombers identified and brought to justice, and Beau believes that Sunnie has the skills to succeed. And if she does, there’s a promise of big money. Against her instincts, Sunnie takes the job. As well as finding the perpetrators, Opaline Drucker hopes that Sunnie will find her granddaughter, who went missing in the chaos of the attack.

The cops don’t exactly welcome Sunnie sticking her nose into their investigation, not that she’s overly bothered by that. They’re even less impressed when Sunnie starts leaving something of a trail of death and destruction in her wake as the people responsible for the bombing don’t take her presence lightly, either. Sunnie calls for back-up in the person of her brother August – Gus – Night, and the body count climbs even higher.

Two Nights is, as you would expect from Reichs, a well-plotted, slick thriller. The characters are strong and interesting, although there were times when I felt she was trying just a little bit too hard with Sunnie. The story is told by Sunnie herself and is littered with wisecracks and sharp asides which occasionally felt a tad forced, but that aside, I liked her. There’s the obligatory dark backstory, naturally, which is drip-fed throughout the book, although there were times when I wholly missed the point of some of them as there was some clever misdirection. Sunnie is tough and smart, and both of these attributes stand her in good stead against an array of opponents of variable quality.

Whether Two Nights is destined to be a standalone or the start of a new series, I don’t know, but if Reichs does decide to return to Sunnie and Gus Night, I’ll certainly be happy to tag along.