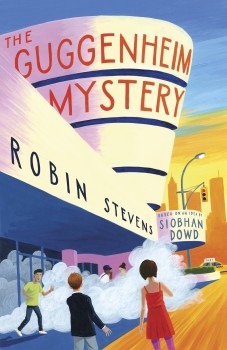 Twelve-year-old Ted Stark, his sister and cousin investigate the theft of a priceless work of art.

Ted Stark, aged 12 years and 281 days, and his 14-year-old sister Kat are being taken on holiday by their mother to New York to stay with their Aunt Gloria and cousin Salim. Ted isn’t keen on leaving London, as he’s never flown before, and going to America will take him a long way out of his comfort zone. Kat is excited to see Salim again. She wants to become a fashion designer, and is hoping to talk her parents into letting her take Art & Design for GCSE in place of the science subjects her parents want her to take. Ted wants to be a meteorologist.

Aunt Gloria has a new job as a curator at the Guggenheim Museum and is keen to show her family around, but the holiday takes a very different turn when the museum is evacuated for a fire alarm, and while the Guggenheim is filled with smoke, a priceless modern art painting is stolen, and suspicion falls on Aunt Gloria.

Ted, Kat and Salim are determined to solve the mystery of the stolen painting and clear Aunt Gloria’s name.

The Guggenheim Mystery is the sequel to The London Eye Mystery by Siobhan Dowd, who died before she could begin work on the next adventures of Ted and Kat Stark. All that existed were the three words of the title. Ten years later, Robin Stevens, author of the Murder Most Unladylike series, was approached by the Siobhan Dowd Trust and asked to take on the job of turning the three words of the title into another teen mystery.

It’s several years since I read The London Eye Mystery, but even from that distance, it was immediately obvious to me that Stevens has captured both the style and the flavour of Dowd’s lively characters. Ted Stark sees the world differently to others. He’s very literal in his thought processes and approach to life, and can state exactly how many times in his life he has told a lie, a number that quickly rises as Ted, Kat and Salim methodically investigate the theft, cleverly following leads and subtly interviewing anyone who was in the museum at the time of the theft.

New York comes vividly to life as seen through Ted’s eyes and with him as narrator, facts come thick and fast, but as Ted explains, that doesn’t mean the facts are actually thick or fast, it’s just a metaphor. He also points out that only five per cent of stolen art is ever recovered, so the trio have a very big job ahead of them.

It’s impossible to be bored in Ted’s company. Stevens is the perfect choice to have continued Dowd’s work; her writing is elegant, her plotting immaculate and the end result is a charming, touching, enthralling and very educational teen mystery.