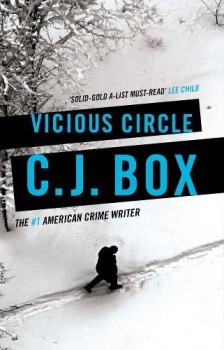 Game Warden Joe Pickett’s history with the Cates clan has given rise to a vicious circle of hatred which pitches his family into a fight for their survival.

Game wardens are more likely to be concerned with infringements of rules on hunting and fishing than dealing with criminal conspiracies, but Joe Pickett has a habit of being in the wrong place at the wrong time. He certainly got on the bad side of the ‘white trash’ Cates family: three of them are dead, leaving the mother in a wheelchair serving life and the sole remaining son Dallas burning for revenge.

The first hint that Pickett has that Dallas is out of prison and back on the warpath comes when a local man, Farkus, goes missing from his elk camp and leaves a phone message that he is being pursued. Pickett attempts to reach the man by air, only to see what appears to be a shooting, and Farkus is found dead the next day. The killing appears related to a meeting at Stockman’s, a local bar, between Dallas, two other men, and a tattooed woman.

Plenty of evidence is found of Dallas’ involvement in Farkus’ death, but legal action is derailed very quickly by apparent over-enthusiasm by local law enforcement officers. Worse, an attack is made on Joe’s daughter April, and it is only by chance that she escapes becoming the victim. Pickett realises that a threat is being made against his whole family – his wife and three daughters – and that with the legal route blocked, the stopping of Dallas will be problematic.

With 16 previous outings, not counting short stories, Joe has some experience of adversity; he also has a few friends he can rely on including Nate Romanowski, the former special forces soldier who has some useful skills. On the other side is ranged a mother-in-law who takes every opportunity to undermine his position with his family, and an opponent with a surprising amount of cash to fund operations.

As usual the setting is the Bighorn Mountains of Wyoming, here during late fall when the weather is turning cold and the hunters are out. Box captures very well the feel of small towns like Saddlestring, where Pickett is based. Life is dominated by hunting, shooting and fishing and the people are proudly self-sufficient, although there is plenty of rural squalor and hard drinking.

CJ Box is always impressive for the economy with which he places the reader into the world of the mountains. I have to say that the picture of backwoods life, with an emphasis on firearms and slaughter of wild animals, male dominated and plenty of macho posturing, is not to everyone’s taste. But the characters never come across as less than convincing, and there is plenty of action. For an obdurate foe and scary risks to the hero, Vicious Circle is hard to beat.