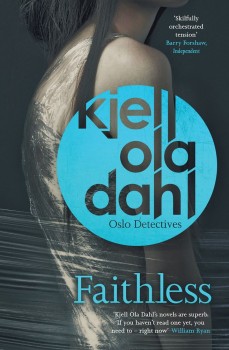 When a scalded body of a woman wrapped in plastic is found in a dumpster, Inspector Frank Frølich has to search for the killer – and also to face his private nearly-forgotten demons.

During a hot July, Inspector Frank Frølich is doing a fairly routine job of watching Kadir Zahid’s house at night but instead of getting evidence to use against the man suspected of unsavoury commercial dealings, he has to face a chain of life-changing events.

When an attractive woman leaves the house, he follows her and she is later arrested for possession of cocaine. Yet Veronika Undset seems to know nothing of the drugs hidden in her handbag. In the evening of the same day he meets her again at the birthday party of an old friend, Karl Anders, whom he hasn't seen for many years, and who is now engaged to Veronika.

The encounter is slightly awkward but bearable. What comes next, within 48 hours or so, is truly shocking and Frølich feels that it has compromised his position in the investigative team: Veronika’s body is found in a dumpster, scalded and wrapped in plastic, and bearing signs of horrendous violence.

The circumstances surrounding the death show contempt and appalling brutality. The search for the killer moves in different directions, following the usual procedures and potential leads, including interrogating all those close to her. Frølich isn’t allowed to step aside, though it becomes clear that there is some uncomfortable shared history and unfinished business between him and Karl Anders.

So Frølich chooses to concentrate more on a second, less prominent, investigation. A Ugandan student, Rosalind M’Taya, has arrived in Oslo to attend the international summer school and vanishes within a couple of days.

Meanwhile his boss, the grumpy, stubborn and solid Gunnarstanda, re-visits a disturbingly similar case of the murder of a teenage girl from northern Norway. The killer was never caught but the coincidences with treatment of the recent victim appear too striking to be ignored. Additionally, both women sought help from the same psychologist. Another investigator, the brilliant and reckless Lena Stigersand, decides to follow the link.

Faithless goes deep into the murky dark sides of the Norwegian society and even deeper when exploring boundaries the police are willing or desperate to push. The novel is very psychologically charged as everybody's life depends on various events in the past and many choices that they actually didn't make. Kjell Ola Dahl has full control over the plot structure which centres on two main investigations, and with authentic portrayal of the main protagonists and their private and professional relationships.

Dahl made his debut in 1993 and is an author of 11 novels. Faithless, part of the prominent Oslo Detective Series, and a fifth translated into English, examines shifting of power, maverick moves, police officers’ decisions to prove themselves right and to be seen as forceful authority figures.

Not everything goes as planned, but it creates superb tension to magnify the human aspect of this chilling police procedural. The dynamics between two main investigators, often communicating in shorthand sarcastic banter, adds to the conflict which moves the matters forward but also might confuse the reader who really should be quick in discovering connections. That's the power of Dahl’s writing, in an excellent, nuanced translation by Don Bartlett. This is a classic Nordic noir for those who love tense, intelligent and unpredictable conclusions.