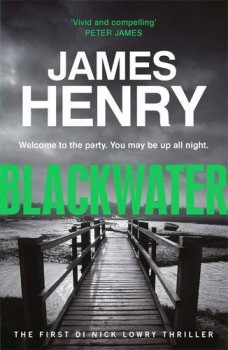 A shipment of amphetamines lands on the Essex coast and sparks a series of killings. An unproven team of detectives must solve the problem – while they also learn how to work and get on with each other

James Henry is the name behind the Jack Frost prequels. Now he has launched his own team of detectives. Set just after the end of the Falklands campaign, Blackwater is an almost perfect period piece. Policing was more rough and ready, no computers, no digital communications or CCTV. Just old fashioned detective work, footslogging, questioning and piecing together bits of a puzzle. Most of all there’s no PC – which allows Henry to portray the then prevailing attitudes to women in the workplace, race and so on.

DI Nicholas Lowry is a careful, solid and smart copper. Approaching 40, he has given up both smoking and the police boxing team. What he does not know is that he has problems at home. DC Daniel Kenton is a new breed. A graduate entrant, fast tracked to his present job, his own boxing ability, his comfortable background and foppish appearance stand out like a sore thumb. Former model WPC Jane Gabriel is a new recruit. Despite a family tie to police brass, her youth and striking beauty give her two problem – a male colleague who pays her too much attention, and an older one who ignores her!

Somehow they must learn to work together as they face a problem which could blow the ancient town of Colchester apart. The arrival of 100 kilograms of a new form of amphetamines sparks a series of killings among some of the town’s less desirables and threaten the always delicate balance between the civilian population and the large army garrison.

Henry’s excellent narrative evokes a strong sense of time and place. Its bleak and watery setting, the smell of the marshes and mudflats, the mists and snows of a grim Essex winter, offer a noir landscape as background to what is often a sordid tale.

The backgrounding is superb. I lived in – and worked out of – Colchester as an agency reporter at the time this book is set. Every detail is perfect: the roads, the pubs, the ‘grab a granny’ clubs, the sprawling mass of petty crime and deprivation that was the ‘Grin-sted’, although I would take issue with him over my favoured drinking place, The Hole In The Wall!

But if the civilian side is perfect, he needs some advice on the military if he is to continue using the often-present tension between town and army. His choice of 7 Para as the major garrison unit is unfortunate. There is no 7 Para, but 7 Para Royal Horse Artillery is a smaller attached unit of tough gunners which provides the Regiment with airborne fire support. Also the mention of his fictional unit taking part in the battle of Goose Green is stretching licence too far. The strong Argentinian positions at Goose Green and Darwin were overrun by three rifle companies, one patrol company, one support company and the HQ company of 2 Para, although their commanding officer Lt Col H. Jones, VC, and 16 of his men were killed in the action.

On a lighter note, he also has trouble with his regimental and garrison commanders and in more than 50 years either in or associated with the army, I have never seen a senior officer with a beard – it’s not allowed.

Overall, Blackwater is a fine traditional crime novel, perhaps with a few too many stereotypes on both sides of the fence, but given the time and setting, I could probably put names to most of them were I to risk the laws of defamation!

Credible characters and different perspectives tie together events and lead to a neat conclusion to what is a compelling and gripping tale written in almost a diary-like structure and leavened with plenty of humour. But there are enough loose ends for the next in the series – not least Lowry’s personal situation.