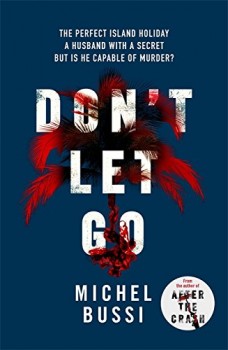 Martial Bellion’s wife is missing and even his daughter thinks he has killed her.

Martial Bellion, his wife Liane and their six-year-old daughter Sopha are on holiday on the idyllic Island of Réunion. It is 3.01pm, and many of the guests are lazing around the pool in the sunshine. Liane goes up to their hotel bedroom, just for a second. At 4.06pm, mildly concerned, Martial leaves Sopha in the care of a couple they had befriended in the last few days, to go in search of his wife.

Liane is not in their room, neither are her clothes. There are signs of a struggle, and enough blood to warrant calling the police. Captain Aja Purvi from the Saint-Gilles station is on the scene by 5.43pm. But witness accounts don’t tally with Martial’s version of events. His traumatised husband act doesn’t carry weight with Aja, particularly when a man is found dead.

Soon Martial goes on the run with his daughter. But even Sopha doesn’t believe they are going to find Maman. She has heard the rumours, and is sure her father has killed her.

I recently read Black Water Lilies, an earlier crime novel by Michel Bussi. It is rare I enjoy translated books; like wine, they should be tasted in their country of origin, whilst immersed in the local culture. Language vagaries often don’t translate well, just like some wine doesn’t thrive travelling across the water. I found the earlier book a little flowery and the voice was on the Latinate side, but the plot was enthralling. I was hooked. So, I was delighted when Don’t Let Go landed in my lap.

The book is set on the volcanic ‘Vanilla Island’ of Réunion, and I was intrigued to learn about the French overseas department so many of my neighbours have visited. Bussi, without lecturing his readers, sets this thriller so beautifully in its milieu, that one could almost be there. His writing is sense-driven, and the stark differences between the peaceful hotel, the car-burdened streets and the savage volcanic interior are palpable.

Written primarily in the third-person present tense, with each scene headed by a precise time, there is an immediacy and closeness to this fast-paced story. A surprising twist, and one which works reasonably well as Sopha is introduced as a precocious child, is chapters and scenes written in the first person, from her point of view. I was not entirely convinced by her voice: a sprinkling of words I have never heard a child that young use, and a few thoughts perhaps beyond her capacity. But her behaviour was entirely credible. It made me question what really goes on inside a child’s head when said child acts out!

The main characters are rounded, flawed, and fly off the page. Martial is a cleverly portrayed enigma who, despite his bizarre behaviour, is someone the reader cares increasingly about. Captain Aja Purvi and her sidekick, Christos Konstantinov, could have been stereotyped, but Bussi draws us, particularly with Christos, far enough into their private lives, that they are unique. Other characters are less well developed, but still lively, and the overall picture is of a truly multi-racial community.

The plot is strong, twisted, and would be a rare page-turner, even for the most seasoned of crime readers. Except for one irritating point – the footnotes. There are just under 50 and they took me straight back to my long, arduous encounter with Shakespeare’s Henry V, pre-O Level. I realise this use of Réunion Patois is to add authenticity, and probably works in the novel’s original French language. I understood many of the words/phrases because I speak French. But to have sometimes two or three footnotes on a page rammed the handbrakes on.

Worse still, by the time the unusual words were repeated further into the book, most readers would have forgotten their meaning, and might be tempted to shuffle back through the pages. The translator would have been better to eliminate the words and replace them with an approximate translation, for ease of reading.

There are moments when backstory takes over. But the further into the book one gets, it becomes evident the historical narrative is necessary. However, the backstory at the end is rather comedic; it is nothing short of a long-winded reveal. Yes, it is because the criminal and criminal’s motives have been well, if not overly, hidden, but for me, it weakened the ending.

That said, I loved this book. I read it in one sitting, and exceptionally for me, it got the pulse above resting rate. For readers in search of a strong thriller set in an unusual place, Don’t Let Go is an absolute must.