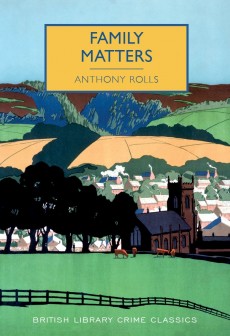 Robert Arthur Kewdingham is an eccentric failure of a middle-aged man with an attractive, exotic wife. When both a local doctor and a bohemian bachelor from London are attracted to her, murder ensues.

Robert Arthur Kewdingham lives in the English provincial town of Shufflecester with his beautiful half-French wife Bertha. Having lost his job in engineering during the Great Depression, he spends his days tinkering with his eclectic collections of objects, working for the Britannia League and treating himself for various imaginary ailments. He also believes himself to be a reincarnation of the High Priest of Atlantis. Because of his hypochondria, the family doctor, Dr Wilson Bagge, is a regular visitor to the house. Dr Bagge considers himself an accomplished pharmacist and likes to experiment on his patients with the medicines he concocts.

Kewdingham’s family detest his wife because of her beauty and because she is a foreigner and the marriage is far from happy. Both Dr Bagge and John Harrigall, Kewdingham’s cousin and a bohemian writer who lives in London, are attracted to Bertha. While nothing actually happens between her and either man (this is, after all, the 1930s!), the neighbours and family naturally gossip and suspicion runs rife.

Bertha is exasperated by her husband, and finally decides to do away with him and starts to add poison to his food. At the same time, Dr Bagge is conducting one of his experiments, treating Kewdingham with increasingly toxic medicines, but the man refuses to succumb. As the situation becomes increasingly bizarre, the doses of poison increase and Kewdingham’s behaviour becomes more and more eccentric.

This book is reissue of a story originally published in 1933. The writing is very much of its time and is reminiscent of the Lord Peter Wimsey stories. It is by no means fast paced and there is no mystery about who is the perpetrator or the reasons for their actions. The suspense comes from whether one or other of them will succeed in the murder and whether they will get away with it. As a trip back in time to a seemingly gentler age and a view on the social mores of the era between the world wars, it is a fascinating read.