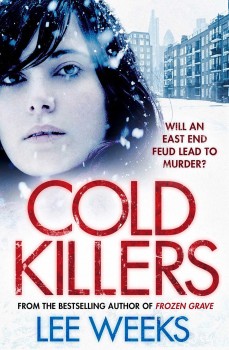 An East End feud has the potential to lead to murder.

Cold Killers opens with a good old-fashioned over the top East End gangland funeral following the torture of Eddie Butcher. Eddie was one of four brothers from a notorious family who had been visiting from his home in Marbella. DI Dan Carter, DS Ebony Willis and others in the Metropolitan Police have been monitoring the funeral in the hope of arresting Eddie’s brother, Tony, who is wanted for robbery, drug trafficking and murder. There is also the suspicion that Tony will happily kill his own family to maintain his power.

There is past history for DI Carter with Tony and this brings a series of interesting angles to the story, which manages to encompass a very long history of serious criminal activity, Spanish police corruption and more recent drug smuggling. The other brothers, Harold and Lawrence, Eddie’s mother, Sandra and several other baddies are all well-crafted characters and thoroughly believable. However, it is Marcos with his connections with the Colombian drug cartels and his very unpleasant methods of getting what he wants that, who steals the show for abject nastiness. He is the kind of person his own mother would probably disown.

Eddie’s widow, Della, also has a pivotal role within the story and shares a past personal history with DI Carter and this introduces another interesting angle to the novel. Some might find this a little contrived but it certainly adds to the suspense. Double-crosses and possible double-crosses abound in the book and the reader is kept guessing most of the time in this gritty crime novel. It is a case of who can you trust and who is telling the truth throughout.

Cold Killers has a gripping and powerful storyline that moves along at a fast pace. There are some great characters and it provides a cleverly crafted and enjoyable insider’s view of the Costa del Crime. It is the fifth in the Carter and Willis series but works well as a standalone read.