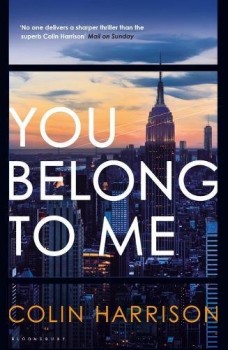 You Belong To Me

New York immigration lawyer and map enthusiast Paul Reeves gets involved in his neighbours’ marital friction, which generates a deadly struggle and an opportunity.

Paul Reeves, a New York immigration lawyer and map enthusiast, is bidding for a rare map he wishes to add to his collection when he notices his neighbour, Jennifer Mehraz, meeting a man not her husband and, back at home, by chance observes them having sex. A few days later Jennifer asks Paul to help the man, William, to find a place to stay, and Paul puts him up at an old family property.

Jennifer’s husband, Ahmad, is from an Iranian family who relocated to US with the fall of the Shah. They command substantial resources; Ahmad travels the world putting together financial deals measured in billions. Although he is frequently away from NY, he has family members watching Jennifer and reporting on who she meets.

Ahmad arranges to have William abducted so he can be questioned. However, William is special forces-trained, and things do not go smoothly. From this point on, Ahmad’s problems multiply; further action to tie things off just gets the family deeper and deeper in the mire. Exposure to prosecution would be disastrous as Ahmed’s employment and even status in US would be at risk.

Reeves plays a marginal role in the struggle over Jennifer until the late stages, when he is fortuitously able to gather information which enables him to put pressure on Ahmed to secure a map which he covets. The deadly forces put in play by the Mehraz family are still active, however, and Paul looks ill-equipped to cope.

I enjoyed this book immensely, surprised not to have come across the author before and keen to explore his back catalogue of seven novels. The tale is well told, comes across as entirely credible, and overcomes the problem of a protagonist peripheral to the main action by giving Paul’s story plenty of interest too.

However, what elevates the author above the herd of thriller writers is his insightful and relevant asides, succinct and telling summaries of aspects of the American experience. Whether it is the future of immigration trends in the US, the size of the rat problem in New York, or the implications of the war in Afghanistan, Harrison has something to say.

His tight summaries on a wide range of topics are informative, thought-provoking and always interesting. And, in what amounts to in-depth social commentary comparable to that of Tom Wolfe, he gives depth to his characters. We are brought to understand, for example, that the apparent power and influence of the Mehraz family hides the vast insecurity of a recent immigrant from a foreign culture where even their appearance makes them suspect.

None of this interrupts the flow and pace of the narrative, which remains gripping throughout and builds to a thrilling finale. The dialogue is as tight as the descriptive passages and the whole makes for the kind of read for which you forego other activities until you get to the final page.