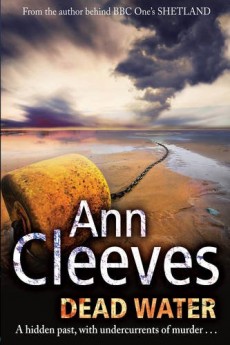 A boat floating in a marina is found to contain the dead body of a young man, a former resident of Shetland.  The police investigative team consists of a woman whose first major case this is and a man still traumatised by the death of his wife.

Jerry Markham, a reporter in the Shetlands before moving to a more prestigious job on a London newspaper, is revisiting the island where his parents own a hotel. On his way he narrowly avoids an accident in his Ferrari and is murdered when he gets out of the car to complain to the other driver.

Rhona Laing, the Procurator Fiscal, finds Markham’s body floating in a rowing yawl on the marina near her house and instantly informs the police. Sandy Wilson, the local detective sergeant, reports the matter to his superintendent in Inverness, who appoints a woman, DI Willow Reeves, to investigate, along with a CSI team. Willow comes from the Outer Hebrides and isn’t familiar with the geography of the Shetlands. Since, this is also her first time in charge of a murder case, she realises that she will need considerable assistance, which Sandy is happy to supply.

Initially Willow doesn’t expect much support from Sandy’s boss, DI Jimmy Perez, who, following the death of his wife, has been on sympathetic leave. However, he begins to take an interest in the case and is soon working on it full time. The murdered man was not popular on Shetland because some years before, he had been responsible for making a young girl, Evie Watt, pregnant. His departure for London was, therefore, regarded as an abandonment of her and, although she had miscarried, the scandal remained.

It is not clear why Markham had come back to Shetland but, since he is an investigative reporter, the police view is that he was in pursuit of a story. If this was the case then it was probably connected with the new green industries - the wind farm and the tidal energy product - which, as the oil ran out, were seen by some as the future. Not everybody agreed, however, that Shetland should be subject to large-scale development and there was considerable bad feeling. Thus, there is a politico/economic motive for Markham’s murder as well as a personal one. Then, whilst the possibility of his ‘story’ is still being investigated, there is a second murder.

Jimmy frequently goes off on what appears to be a personal line of inquiry, much to the annoyance of Willow who feels that her authority is being undermined. He does his best, however, not to annoy her too much and tries to get her permission for his individualistic approach. Ann Cleeves suggests that he has other reasons for not upsetting her as he notices the scent of her hair and the way in which she stretches her legs when she sometimes sits on the floor during informal conversation - this in spite of the fact that he regards himself as incapable of ever loving again. Not too much is made of this apparent attachment but it adds a certain something to their relationship and brings them alive for the reader. Sandy too is a very lifelike character, anxious to please but unsure of himself and always looking for someone to tell him what to do. The other main characters - Evie Watt and Rhona Laing - are similarly well developed.

The plot is very well put together and the reader is frequently presented with situations that leave behind a question. Those inveterate readers of mystery thrillers who like to solve the crime before the culprit is revealed are given every opportunity to do so. On the other hand, the story line is so tense that many will simply want to get to the end as soon as possible to find out who the murderer was and, just as importantly, the motive.

If there is one minor criticism it is that the story seems to come to a rather abrupt end. Suddenly - and it is not entirely clear how - Jimmy absolutely <i>knows</i> who the killer is and just as suddenly he has to act to prevent a third murder. The author seems to be aware of this because there follow a few pages in which Jimmy explains to Willow and Sandy exactly what his thought processes had been and how he identified the murderer.

On the whole, however, this is a highly entertaining thriller which succeeds at least partly because the background and atmosphere are so vividly presented. Occasionally, readers, like Willow Reeves, may feel that they are - geographically at least - rather lost in the Shetlands fog as the action moves from place to place. The inclusion of at least a sketch map would have been useful.