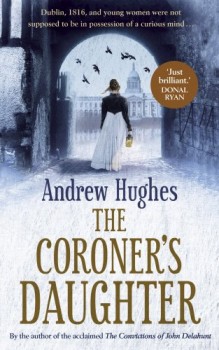 A nursemaid conceals her pregnancy then murders her newborn, but before an inquest can be held, she is found dead. Abigail Lawless, daughter of Dublin’s coroner, investigates and is drawn into a world of zealotry and danger.

From the opening sentence: “For my eighteenth birthday, Father promised me the hand of a handsome young man, which he duly delivered mounted in a glass bell-jar”, you realise that Abigail Lawless is not your average young Dublin society lady!

Strong, resourceful and with a passion for science, Abigail has been raised amid the books and instruments of her father’s grim profession as Dublin’s coroner, and is no stranger to death.

When a young nursemaid in a well-to-do house first conceals her pregnancy, then murders her newborn baby, but is herself found dead before an inquest can be held, Abigail chances on a message from the maid’s seducer, and sets out to investigate. Meanwhile an extreme religious sect known as the Brethren has been rapidly gaining followers among Dublin’s elite and prosperous tradesmen. Everything they stand for opposes the rational approach to science and life espoused by Abigail and her father.

As she continues her search, assisted by her father’s apprentice, Ewan Weir, Abigail becomes convinced that the Brethren are somehow connected with the deaths of the maid and her baby.

Against the bleak background of 1816, ‘the year without a summer’, with fogs and frosts in July casting a pall over a city where poverty threatens civil unrest, and evangelical zealotry and rationalist dogma clash among the upper classes, she finds herself drawn into a world of hidden meanings, deceit and danger. An only child, she has been encouraged in her scientific interests by her father, but her sex alone puts additional obstacles in her path., She is forced to submit a perfectly valid explanation of the extraordinary weather to a scientific journal under her father’s name and is the only female in the audience at an astronomy lecture.

Her father tries to encourage her to be more ‘feminine’, and their relationship is honest and delightful, but you are left with the sense that as a pioneer of what would become forensic science, he is only too pleased to have someone to share his knowledge and passion with.

But it is Abigail – a marvellous attractive heroine who crosses almost effortlessly from a Jane Austen-like world of a growing interest in her father’s handsome young assistant, polite conversation, balls and fine clothes, to dissection rooms and grim hospitals – who carries the story through sheer force of personality.

She is determined, resourceful and intuitive, and her ceaseless speculation on almost any subject and her humanity make her a rich and satisfying character. As she leads the reader through the Lying-In Hospital, to the smart terraced houses of Fitzwilliam Square, a clockmaker’s workshop, dead houses, Gothic churches and elegant ballrooms, you will get a real feel for the mid-19th century city. Hughes’ descriptions of Dublin’s life and culture, bring it to almost tangible life. Although most of his characters are gentry or professional people, he also manages to give some sharp insights into the position of servants and the dreadful poverty of some of the poorer classes.

There’s loads of information about the scientific developments of a period which saw the real dawn of forensic medicine as well as other advances – and Hughes even remembers that a young woman, no matter how scientific her mind, somehow has to keep abreast of the latest fashion trends!

The Coroner’s Daughter is a superbly written, totally enjoyable story. Yet all the time there is a scarcely hidden sense of menace as Abigail’s investigation is watched from the shadows by someone she believes has already killed twice, and is prepared and waiting to kill again.