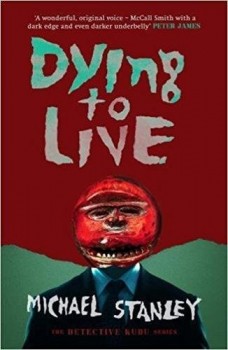 A dead bushman is only the first of a series of deaths brought to the attention of Assistant Superintendent ‘Kubu’ Bengu and Detective Samantha Khama.

This is the fifth outing for detective Kubu of the Botswana Criminal Investigation Department, where once again traditional medicine is at the heart of evil goings-on. A bushman is found dead following an assault, An autopsy discovers that the man is physically in a much better condition than would be expected for a man reportedly well over 100 years of age.

Shortly thereafter the wife of a witch doctor, Ramala, reports him missing. Kubu’s assistant Samantha takes the case. Samantha is sceptical at first; her past cases have left her with no love for the dispensers of traditional medicine, muti, who rely on the desperation of the uninformed, and have been known to use the body parts of young girls in their prescriptions.

Another person is soon registered missing, an American named Collins, who was visiting the area supposedly to gather evidence of bushmen acting as custodians of the oral history of their culture. Kubu, however, feels that Collins too was involved in a search for medicine, in his case with a view to identifying its make-up and manufacturing it in industrial quantities for profit.

A connection between these cases seems probable, but for a long time the details remain elusive. As usual, Kubu and Samantha pursue the investigation with vigour and intelligence and eventually crack the case. The subject is given a very personal meaning to Kubu by the illness of his adopted daughter Nono, who is HIV+ and not responding well to prescribed retroviral medicines. His wife Joy is so concerned that she presses Kubu to obtain muti for her. Kubu is torn between his wish to placate his wife and his belief that such medicines are a merely a product of superstition.

Notwithstanding the exotic nature of the setting, the African landscape, the foreign words (for which a brief glossary is given), the bushmen and the traditional beliefs, there is much here that is familiar. Kubu has a boss who wants results but doesn’t want to hear about problems, and a sergeant in the bush who is less than enthusiastic and delegates everything he can to subordinates. There is a high standard of professionalism evident with the evidence technicians and throughout the team: this is not third-world policing.

Kubu still has the strong interest in food and drink and the all-embracing love for his family which makes him such a charming character. This gentle detective is nonetheless capable of steely resolve where necessary, and he plays a good game of bluff to expose the prime movers. The book sustains the quality of earlier titles; in fact I think the series may be getting better.