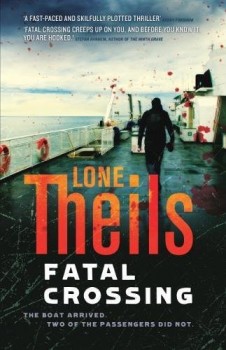 Journalist Nora Sand discovers that a decades-old cold case concerning two missing girls is about to become too hot to handle.

Nora Sand, an English-based Danish journalist working for her homeland weekly magazine, Globalt, decides to treat herself to a quaint old suitcase she spots in a junkshop window. She thinks, why shouldn’t she. After all, she has just interviewed a Rwandan mass murderer, and needs a distraction.

When she opens the case, she finds a selection of dated photos. Nothing seedy – just lone girls standing up against walls, casual, some smiling and some flirting with the camera. Then one of the photos catches her eye. It is different from the others; a picture of two girls. And there’s something else. Soon Nora realises they are two Danish girls who went missing on a trip to England in 1985. Curiosity soon escalates to risk-taking as Nora finds herself investigating their disappearance, which involves a serial killer doing life. But surely it can’t be that dangerous if he is locked away …

I’m in. Since the all too brief encounter with the inimitable Stieg Larsson, I have been a sucker for Scandinavian crime-writers. Whatever the reason, I ignore my ambivalence to reading translated work and get stuck in.

Written in the third person past tense, the story sticks with the protagonist from start to finish, giving a degree of intimacy and a capacity to get to know Nora. And there is much to like about her, despite her moments of crass stupidity. For once, the reader is treated to a reasonably atypical journalist. Yes, she is passionate about her work. Yes, her boss is a pain in the arse. Yes, her non-existent love-life is going to Hades. But, despite her feistiness, she doesn’t come across as a stereotypical, near-alcoholic, predatorial reporter.

Although in theory, this is a two-destination story, flitting between Denmark and England, there is a lack of clarity in places, leaving the reader wondering at times where Nora is. This is made worse by one English village, important to the plot, being fictional, while all the other places are real. Worse still, the fictitious village has a name that could be Danish or English.

The love interest is corny and utterly predictable. Gosh, Nora has unexpected feelings for her lifelong friend, Andreas. Gosh, he has a girlfriend who an idiot could see he is not as in to as he is Nora. Gosh, Nora blows hot and cold and hides her feelings. Crikey, just when she needs him, Andreas flies off to another country without realising the danger Nora is in. For a journalist, Nora clearly has a problem with communication. I wanted to slap her, and tell her to grow up.

Equally trite is the impression Nora has of the English and our culture. Here, the author’s voice comes through, too loud, too clear; an intrusive distraction. Another annoyance is the protagonist munching her way through the entire investigation. While it makes a change from reading about the main character downing shot after shot, in the end I was bored, if not a little jealous, with the unending lists of food. Neither does an in-depth description of each character’s clothes do it for me. If it doesn’t advance the plot or give me an insight to the character, don’t waste words on the wardrobe.

Although the plot is reasonable, a large bucket of conveniences and a heap of unlikely behaviour on the part of the law enforcers, let alone Nora, gave my suspension of disbelief a hammering. The outcome is predictable, and the reveal overworked.

Finally, one of my dislikes is the regular replacement of ‘said’ during dialogue. Particularly when the author uses such words as quipped (pretentious) and laughed (impossible). Unfortunately, this happens all too frequently in Fatal Crossing.

Reading back, it sounds like I hated this book. Not at all. Despite its girlish slant, it is a fairly well-paced read, and shows potential. It has enough dark and graphic scenes to satisfy. There is a good balance of introspection and action. And it certainly entertains.