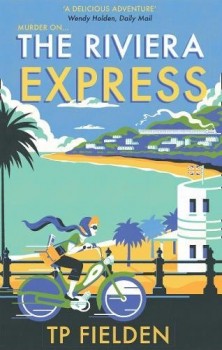 The death of one person in a small Devonshire seaside town could be misfortune. Two the same day convinces reporter Judy Dimont that something is going on.

Welcome to Temple Regis, home to Miss Judy Dimont, head reporter for the Riviera Express. Her usual routine of reporting petty crime at the magistrate’s court, petty gossip from tea room sources and petty politics from the Rotary and Golf Clubs is disrupted by the arrival of Gerald Hennessey, a film star on the Riviera Express train. Unfortunately, Gerald, is dead on arrival.

No sooner has this shock registered than Miss Dimont hears of another death, an Arthur Shrimsley, at the foot of some nearby cliffs. Miss Dimont is convinced the deaths are neither natural nor independent of each other. But she struggles to investigate them in the face of stonewalling police, hostile magistrates, her dithering boss and over-acting thespians. She must battle through all this to find the links between Hennessey and Shrimsley and also the links Hennessey has to Temple Regis itself.

This is a satisfying puzzle with plenty of charm of characters and place. Temple Regis is fully imagined in location and population, all basking in a sunshine glow of nostalgia and sly, but friendly humour. However, the recent war is not forgotten. It is there in the personal histories of the characters including Miss Dimont herself, who did something more than just typing in the basement of The Admiralty.

There are twists and turns enough, and a few red herrings, to keep the armchair sleuth interested. Miss Dimont has to work hard to unravel this puzzle, helped and hindered by her friends and colleagues. The solution is rooted in Temple Regis and its inhabitants and provides a nice level of revenge and schadenfreude for Miss Dimont and reader alike.

I enjoyed this book. And I liked the characters who, although occasionally drawn in broad strokes, never topple into caricature or stereotype.