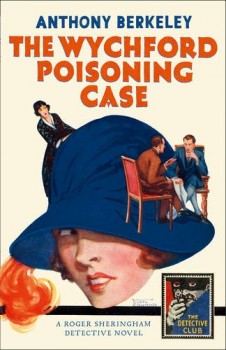 French-born Mrs Jacqueline Bentley is to hang for the poisoning of her husband. Novelist, amateur criminologist and psychological detective Roger Sheringham sets out to prove even her own lawyers wrong and unmask the real killer.

The publishers should be commended for their efforts to bring modern readers the best of the Golden Age of crime fiction, but this story, out of print for more than 90 years, may be going a step too far! Based on a notorious real-life murder inquiry, it’s certainly ingenious, but I’m afraid some of its outright sexist attitudes will upset even just moderately PC readers.

Published in 1926, the story is notorious for its spanking scenes, in which a teenage girl is the victim of both her own cousin and his friend, the story’s protagonist, who beats her with a rolled-up paper while she is held down. Taken in context, it reads like horseplay between people who have known each other since childhood. The girl’s parents certainly treat it as such. But in PC 21st century eyes, it is all too easy to read a sexual motive into it.

More worrying perhaps will be amateur criminologist Roger Sheringham’s positively misogynistic tendencies. He seems to have real issues with women. Claims that “nearly all women…. are idiots,” and “not over-burdened with brains”, are hardly likely to strike a chord today. Despite a later statement that he values their opinions and respects female characters, this may have been one of the reasons that kept this novel out of print.

All in all Sheringham, probably the first detective to feature in a psychological crime novel, is not a particularly nice character. He is vain, overbearing, smug and devious. He is also quite brilliant, although unlike Sherlock Holmes, who was always certain and always right, he frequently jumps to incorrect conclusions.

French-born Mrs Jacqueline Bentley is awaiting trial for the poisoning of her husband. The evidence against her is overwhelming – arsenic she extracted from fly papers was in his medicine, his food and drink. Her crime is front page news. Everyone knows she will hang – and even her own lawyers believe her guilty. But Sheringham, is convinced that there is just too much evidence and sets out to prove her innocence.

He is aided by his friend Alec Grierson, who featured in the introduction to the series The Layton Court Mystery and his teenage cousin Sheila, and it soon becomes clear there are several people who could have committed the crime, all of whom have motives for wanting Bentley dead, and it eventually builds to a real twist ending.

That said, although the story is brave in having the detective trio never meet the suspect or have any access to police sources, and is a good deal of fun in parts, it is also rather silly and flimsy. Grierson and young Sheila Purefoy are little more than sounding boards for Sheringham’s psychological virtuosity, there is little suspense and far too many flat, dull, passages. It’s interesting enough as a forerunner of its kind, but certainly no page-turner. Berkeley clearly had second thoughts about it himself when he refused to allow reprints – and many readers, like me, may well think that decision was justified.