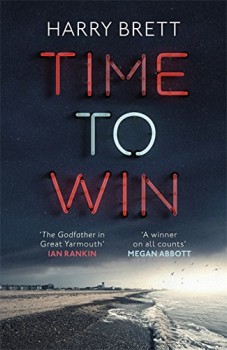 When local crime boss Rich Goodwin is pulled from the river, it looks like suicide. But Goodwin had many enemies and as his widow Tatiana struggles to take over his business, she quickly learns that power comes at a price.

When local crime boss Rich Goodwin is pulled from the river behind his office it looks like suicide. But Rich had many enemies and most of the town’s criminal fraternity had reason to kill him. His widow Tatiana, seeking to uncover the truth about his death and take over the family business, soon comes to realise how little she knew about him, or his dream project – a super waterfront casino to put a fading holiday resort back on the map. She turns her back on a life of sleeping pills and vanity projects, and is determined that no one, particularly Rich’s untrustworthy brother, will stand in her way.

But an American, apparently connected to the shady financiers of the casino deal, is in town asking the right people the wrong questions. A brutal new gang appears and more bodies start to turn up. With her family to protect, and a business to run, Tatiana quickly learns that the power she seeks always comes with a price.

All the requisites of noir are there. The story is brooding and atmospheric. Great Yarmouth is an almost ideal choice of setting, a claustrophobic community whose location and facilities lend themselves to the seediness and brutality which so often dominates fading rural communities. There’s the requisite number of swear words, fairly sordid sex, corrupt police and officials, but somehow it all fails to gel.

Tatiana, ‘Tatty’ to her few friends, may yet become a matriarch to rank alongside some of the great crime bosses. But unless you buy the next book in the series, you’ll never know! Just as she begins to get to grips with the problems Rich has left behind, aided by his ageing and overweight homosexual enforcer who feels an obligation to the family, this episode ends – a rather shabby trick, which in my opinion is akin to cheating the reader!

Basically, this formulaic and unfinished tale of small town corruption, organised crime and a seriously dysfunctional family is noir by numbers, fill in the criminal colours, and join the violent dots.

Still, if you’re ever caught in the dismal Fenland weather which so often makes Yarmouth a naturally noir environment, this story, which seems to unnecessarily detail every street in the town, will enable you to get around without an A to Z!