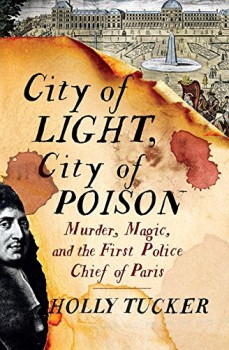 City of Light, City of Poison

Nicholas de la Reynie, the first police chief of Paris, is given the job of cleaning up the streets of Paris and ridding it and its courts of poisoners and black magic.

If you’ve been watching Canal+’s extravagant and delightfully outrageous costume romp Versailles on BBC2, there will no doubt have been times when you’ll have thought that the plot had veered sharply into the realms of fantasy rather than history. If that’s the case, think again. If you’re desperate for another fix before the third season hits our screens, then Holly Tucker’s immaculately researched City of Light, City of Poison will fill the void left by the performances of George Blagden (Louis XIV), Alexander Vlahos (Phillipe, Duc de Orleans) and Tygh Runyan as Fabien Marchal, the adorably sinister head of security at Louis XIV’s rapidly expanding new palace.

For lovers of Monsieur Marchal, City of Light, City of Poison will bring to life the man on whom the character appears to have been based – namely Nicholas de la Reynie, the man considered by many to be the founder of the modern policing. In 1667, La Reynie was appointed to the position of Lieutenant General of Paris and given the job of cleaning up the dark, dirty and dangerous city.

One of La Reynie’s first tasks was to bring some light to the capital’s streets at night, in an attempt to discourage the many criminals that took refuge in the dark corners of a notoriously lawless city. His second job was to rid the court of Louis XIV of the scourge of poisonings that were playing havoc amongst both the upper and lower classes. For some, poison was a means of getting rid of an unwelcome marriage. For others, it was a means of furthering their own advancement by removing inconvenient family members or getting rid of love rivals or furthering their own romantic interests. There’s also a hefty dose of black magic, rampant superstition and mass abortion.

Tucker presents a warts and all look behind the scenes at the glittering court of the monarch dubbed the Sun King. Her research took her deep into one of the biggest court scandals of the time, the Affair of the Poisons, which was even rumoured to have claimed the wife of the king’s sister-in-law, Henrietta Anne, the daughter of King Charles I of England. Tucker’s research encompassed a mass of original documents in various French archives, all of which is set out in the impressive bibliography.

The style is immensely readable, but never loses its authoritative tone. Tucker’s work inspires confidence, as well as providing a fascinating account of a flamboyant king’s desire to root out corruption at his court, whilst wilfully turning a blind eye to the behaviour and actions of one of his favoured mistresses, Françoise Athénaïs, Marquise de Montespan.

La Reynie comes across as a principled but entirely ruthless man. The extent to which torture was used in the French judicial system is horrific, but Tucker makes a point of differentiating between confessions obtained under extreme duress and ones that received additional corroboration from other sources, as she makes the valid point that torture is an unreliable means to establish the truth, something which governments on both sides of the Atlantic would do well to remember.

City of Light, City of Poison amply demonstrates that fact is nearly always stranger than fiction and Nicholas de la Reynie stands out as one of the most fascinating characters in the early history of policework.