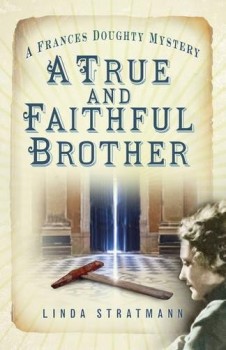 A True and Faithful Brother

A wealthy philanthropist disappears from a locked Masonic hall. Lady Detective Frances Doughty is drawn into a case that involves her own family and puts her life at risk.

The story unravels slowly, but the pace is hardly important with vivid details and the accurate period dialogue embedding the reader firmly in the often murky Victorian London of 1882. Running parallel to the main story is Frances’ struggle to establish herself in what is very much a man’s world and to find out the truth of her own family. It all binds together remarkably well as Linda Stratmann pays passing and stylistic tributes to Conan Doyle and even Jane Austen to produce a quite fascinating tale.

After a series of bad experiences on her last investigation, Frances decides to end her criminal work. But when a wealthy philanthropist disappears from a locked and guarded Masonic lodge, she is reluctantly drawn into a missing persons case that quickly turns into one of murder. Worse still, the dead man is the father-in-law of the man Frances suspects to be her natural father. She must decide whether her investigation will shed light on her family background or whether she should she stay away from it because of this link. Her mind is largely made up for her by events and by the unhelpful and downright hostile attitude of the police.

The meticulously researched, but low-key story has moments of real suspense. What seems a cast of thousands – many making their return from previous adventures – frequently demands a serious effort on behalf of the reader to keep track of progress, but that is part of its charm. Returnees include the massively impressive and commonsense Sarah, Frances’ friend and assistant, who when not sorting out abusive or recalcitrant husbands, continues her almost stately courtship of the equally massive bodybuilder and pugilist Professor Pounder; West London’s equivalent of the Baker Street Irregulars led by Tom Smith and Ratty; and, unfortunately, the dreadful poet of huge self-confidence, pompousness but little talent, Augustus Mellifloe.

All provide distractions from the main plot, but it is the character of Frances herself which carries a story which many will find all the better for not being sensationalised. To call her buttoned up is an understatement. She is constantly trying to prove herself to an at best condescending male world, while hiding her own insecurities, and her constant reserve illustrates the difficulties of life for a woman trying to make a living in late Victorian times.

Meanwhile, her preoccupation with the mysterious author Mr Grove, who has turned her into a best-seller under the guise of Miss Doughty, but also intervened at crucial moments in the past continues. Her blushes at the odd improper thoughts for a respectable young lady occupy her so much that she has resorted to the tiring, but then popular, exercise of club swinging to banish him from her mind.

There are enough dead ends, twists and turns to fill another book and although the denouement is something of an anti-climax, there is still one more twist to come to neatly round off the story.