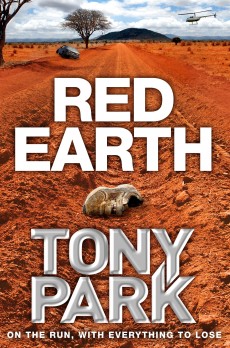 A South African woman is carjacked. Police are dealing with the assassination of the American ambassador by a suicide bomber and cannot respond, so helicopter pilot Nia Carras and wildlife researcher Mike Dunn are called in to pursue the vehicle.

No modern author writes with as much knowledge, conviction and love of the Southern Africa of today as Aussie veteran army officer Tony Park, who divides his time between his own country and dedicated stays of up to six months in the area which inspires his latest story.

This is set in an area I know and love – the green and fertile KwaZulu-Natal north of Durban, stretching 500 miles north around Swaziland into the scorched, sparse and rocky Kruger National Park up to the point where the borders of South Africa, Mozambique and Zimbabwe meet. The red earth of the low veld – which gives this bang up-to-the-minute, break-neck and bloody thriller its name – the hot dusty roads, endless variety of landscapes, teeming wildlife, beauty and cruelty are themselves major players.

And as always Park features a creature threatened by organised poaching as a highlight. This time it’s Inqe – the Zulu name for the vulture, the one who purifies the land – nature’s winged ‘clean-up’ squad. These ugly carrion eaters, who cover hundreds of miles in a single hunt for food, play a vital part in preventing the spread of disease by stripping any corpse to the bone.

What I did not know – and suspect few readers will – is that these birds, who rarely raise more than one chick, are poisoned in large numbers to satisfy believers in traditional African medicine who believe a vulture’s head will bring them luck.

It is the contrast between the need to conserve Southern Africa’s great beauty and wildlife and its corrupt politicians, petty bureaucrats, gangsters, poachers, arms dealers and the tragedies of poverty and AIDS, which makes Park so compelling. His tales are fast-moving, bloody – and frequently appear improbable to those who do not know the country. But when an armed security guard asks you to check your gun at the entrance to a shopping mall in a major city; the ease with which weapons can be sourced; and bloody battles between anti-poaching units and the gangs who slaughter wildlife for the alleged medicinal properties so prized in the Far East, it all becomes rather more likely.

Park’s latest involved and complicated saga is impossible to sum up briefly. It opens with a car hijack, a common enough occurrence in South Africa. The woman driver shoots one would-be thief. The other, wounded, escapes in her car – with her baby still strapped in the back seat. The Durban police, stretched to their limit after the killing of the American ambassador by a suicide bomber, cannot respond. Helicopter pilot Nia Carras and wildlife researcher Mike Dunn are called in to track the vehicle.

From there, the book spirals into a tough, thrilling, bloody, brutal and compelling story, involving poaching, huge sums of money, international terrorism and the CIA. There is also a touching coming of age story as a young Zulu bids to shake off a criminal past for the sake of the girl he loves, and another slow-burning love match between Nia and Mike, who struggles to shed his guilt for a past killing.

As always Park, despite his brilliant portrayals of the colourful and intricate South African peoples, is controversial, suggesting the South African Defence Force was responsible for a large-scale illegal trade in wildlife and subsequent cover-ups during the 1970s bush wars. Those of us who know the area also know most species were then multiplying. It is only since those the SADF fought against came to power that organised poaching has threatened the extinction of animals like the elephant and rhino.

Be that as it may. For lovers of African adventure thriller, pioneered by writers such as the great Wilbur Smith, Park is now required reading. This is a truly riveting read you won’t want to put down.