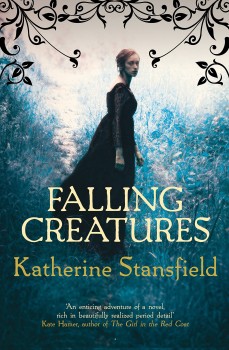 Country girl Shilly finds love with the strangely gifted Charlotte Dymond on an isolated Cornish farm. When Charlotte is murdered she sets out to find the truth.

Generations of writers have used the rugged and inhospitable Bodmin Moor, with its isolated villages, insular and superstitious people, craggy tors, deadly bogs and air of brooding menace as a setting for Gothic thrillers. It’s a place where anything could happen. And no one knows that better than Katherine Stansfield, who grew up in the shadow of Roughtor. She has drawn on a true story from the moor’s grim history to produce a chilling and compelling melange of superstition, witchcraft, lesbian love, alcoholism, murder and detection.

In 1844, farm labourer Matthew Weeks was hung for the savage killing of Charlotte Dymond at Penhale Farm. The brutal killing was so sensational it attracted attention even from London papers – at a time when it was easier to travel to France than Cornwall.

Many court transcripts and both local and national press reports are still available and the case stirred so much interest it still sparks books as well as local comment. It is unlikely under current law that Weeks would have been convicted. Much of the evidence against him was, to put it mildly, unsatisfactory. From an amateurish and botched investigation by local constables to a magistrates’ committal actually naming him as the killer, it was inspired by gossip, jealousy, superstition, hatred and prejudicial attitudes to those considered social inferiors.

Stansfield quotes extensively from these documents to support a brutal picture of the isolated moor-dwellers – a society where smuggling, drunkenness and sexual perversions of all kinds were almost a relief from the grimness of everyday life.

On a lonely moorland farm, maid-of-all-work Charlotte, known by her nickname of Shilly for her shilly-shallying behaviour, finds love in the arms of her fellow worker Charlotte Dymond. But her new friend has many secrets and apparently possesses witching powers that can cause both good and evil. When she is murdered, Shilly cannot believe Weeks capable of the crime and pledges Charlotte’s ‘fetch’ or ghost to bring whoever is responsible to justice.

With her search floundering, but her conviction undimmed, she is befriended by an educated stranger calling himself Mr Williams who also has doubts over the case, seeking Shilly’s help while offering his own views.

But in a world a dark secrets, half truths and lies, Williams has secrets too. The barely educated country girl, who relies completely on her sense of what is right and wrong, is thrown into a bewildering world of modern deductive detection as their joint – and often troubled – investigation builds to shattering conclusion.

It seems unfair to talk about weakness in this often horrifying and truly engrossing story, but the ending is left rather hanging in the air. With a sequel due next year, it won’t be long before the next stage of the relationship between Shilly and Williams is revealed.

Falling Creatures is a great read. It’s clever, more than plausible and its sheer pace and emotional power will appeal not just to devotees of the Gothic but also to anyone who wants a genuinely gripping and informed piece of historical thriller writing.