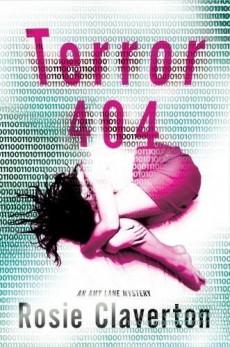 Disgraced hacker Amy Lane is in a private psychiatric hospital, and has to use all her ingenuity to stay safe and solve a crime.

Disgraced hacker Amy Lane is in a private psychiatric hospital, kept apart from her friends and former colleagues and not allowed any form of contact with the outside world. She has no phone, tablet or computer, and for Amy, that’s the worst type of deprivation. She’s there because she tangled with Frieda Haas of the National Crime Agency and lost. Her former assistant, Jason Carr, is on the run, a warrant out for his arrest, so he’s not in any position to help her. Amy is on her own.

When a patient at the hospital dies in unexplained circumstances, her body is taken to the mortuary, but before the results are known, the doctor performing the post-mortem is brutally attacked and the woman’s body is stolen. If the police weren’t particularly interested beforehand, they certainly are now. But their attempts to work out what’s going on don’t go anywhere very fast, despite Jason inveigling himself back into the thick of things with harassed DI Bryn Hesketh, recently returned to work after the internal investigation into him and his team that started in response to the events of the previous book in this series, Captcha Thief.

When I first met agoraphobic hacker Amy Lane, I wasn’t sure whether her issues were just yet another crime scene gimmick and to a small extent, that’s true and in Terror 404, Amy has the added problems of severe anxiety plus the return of her sister and their estranged parents. But Amy is tenacious, clever and determined. Jason is charming, tough and loyal. He misses Amy a lot, and is trying to come to terms with his feelings for her, feelings that go further than that of an employee or even colleague. But Jason must thrust those feelings to the back of his mind in the pursuit of the killer who threatens Amy and the other patients at the hospital.

Rosie Claverton’s plots are never straightforward and Terror 404 is no exception. Combined with some fancy footwork is a good, solid, character-driven story. Amy’s mental health problems are sharply depicted, but there’s no cheap emotional punches here. Claverton writes well and convincingly on these issues, and deftly handles the complex work that goes into a mental health section and how it is possible to extricate someone from one.

Terror 404 slowly gives up its secrets, but there is no pantomime reveal, for which I was very grateful. Claverton manages to tie up any loose ends neatly, but the question that remains at the end of the book is whether Amy will honour her deal with the devil, or risk the devil’s ire. It’s a difficult call to make.