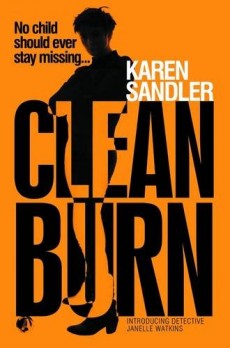 Former police detective Janelle Watkins breaks her vow never to touch a missing child case and returns to her home town to look for two kids. There she must face her past – and the sheriff whose marriage she broke up when they were police partners in San Francisco.

Philip Marlowe was allowed to get away with unexplained misogyny and no back story. His private investigator successors – particularly the women – are all equally flawed and the modern trend seems to for a novel to be as much about the detective as the perpetrator. Scarpetta, Rizolli, Cooper and the others all have their varying problems – anger management, drink, drugs – now Karen Sandler has set the bar even higher, or rather lower, with a self-abusing protagonist.

After a ghastly and abusive childhood, former San Francisco detective Janelle Watkins has an unhealthy fascination with fire and burns herself as a coping mechanism to deal with stress and emotional pain. At first I thought ‘only in America’, but Watkins is a compelling and ultimately convincing character. Broken and dark, she believes herself unworthy, unlovable and beyond hope. Haunted by her past and memories of children she failed to save during her police career, self-harm through burning, or drink are both her curse and salvation.

Somehow Sandler translates this mess of complexes and self-destruction into a very real and surprisingly sympathetic character. She’s tough, able enough to master fear, and tenacious in pursuit of justice. No longer bound by police procedure, she’s prepared to act at the very edges of the law.

Having sworn off cases involving missing children, she is half conned, half blackmailed, into returning to her home town to investigate two youngsters who have disappeared – and must face the county sheriff, her former SFPD partner and lover, whose marriage she helped ruin. A series of unexplained arson attacks seems to link to the children and the story races to a brutal and explosive conclusion.

This juxtaposition of a small-town community where everyone knows her past and her own city mindset make an intelligent and clever plot even more outstanding. So too does the narration. Mainly from Watkins’ own perspective, it is interspersed with chapters from the point of view of the abductor and one of the missing children, in this case an enormously effective technique which not only ratchets up the tension, but also misdirects the reader.

Characterisation is convincing and cleverly handled and dialogue, often spiky, is realistic. If there are to be more Watkins adventures, readers will want to see more of her beautiful, bright and sparky assistant Sheri – another woman who knows her own mind and isn’t afraid to speak it – who often acts almost as Janelle’s conscience in forcing her to face unpleasant issues.

All round, Clean Burn is a superb debut and a great, although often disturbing, addition to the ranks of the female PIs. We should hear a lot more of Janelle Watkins.