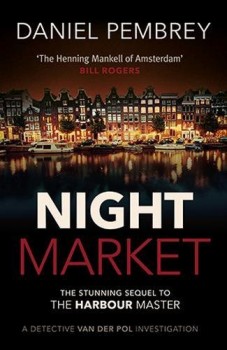 Detective Henk van der Pol is enmeshed in a conspiracy that incorporates senior figures in the justice system, but is unsure in which direction to point the finger.

After 30 years as a detective in Amsterdam, Henk van der Pol is summoned to the Justice Ministry and assigned to a small team in Driebergen, near Utrect, focussed on exposing a major international paedophile network. His wife is not happy about the move, but Hank is keen to distance himself from the Amsterdam police commissioner Joost, with whom he has had serious disagreements.

Henk, who tells his story in the first person, arrives in Driebergen to find the multi-national team riven by suspicion and strong emotions, which extend to Henk himself. The team are right to be wary: Henk has been tasked with identifying a rat who has been tipping off the targets. When Henk acts on information acquired through the team, their distrust boils over into a murderous assault.

Recovering back in Amsterdam, Henk is assigned to more mundane duties, starting with a rash of moped thefts. Even here, however, he uncovers links to more serious criminal activity – he stops a stolen bike and finds it being used to deliver drugs. He begins to make connections between a club where the drugs are manufactured, and the paedophile ring still under investigation. Some very powerful names are involved, and they are prepared to be ruthless to protect their interests.

Night Market follows directly on from The Harbour Master, and eventually resolves at least some of the mysteries left hanging at the end of the first book in the series. Without reading the forerunner, Night Market is not always easy to follow, and only when you reach the sections in italics at the end, repeats of passages from The Harbour Master, is Henk’s confusion and partial memory loss explained.

I also found it difficult to reconcile Henk’s supposed lowly status, assignment to stolen mopeds, and so on, with the personal interest in his career taken by those at the upper echelons of the justice system, and the freedom he is given to follow his own agenda, including foreign visits when he thinks it necessary. You can’t help feeling that Henk’s superiors are somewhat justified in their complaints when he is so difficult to locate and always unforthcoming about his movements.

There are certain echoes of other Amsterdam-based sleuths to be found. His relationships with his wife, a liberal journalist, and with his daughter are uneasy on account of Henk’s obsession with crime. Hank and his wife live on a houseboat, of course; he drinks heavily and is trying to give up smoking. Henk does come across very strongly, however, as a dedicated professional, a detective who goes straight for the jugular because he knows no other way to act. The rather chilling atmosphere of the new port area is effectively portrayed, a good match for the undercurrent of corruption and violence which Henk brings to light.