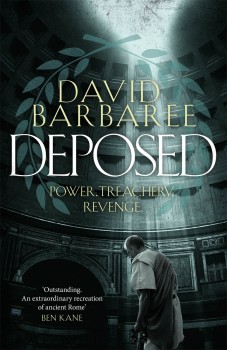 Blinded and imprisoned Nero, god and Emperor of Rome, is helped to escape by a frightened little slave boy and plots his revenge.

We all know about the Emperor Nero – a sadistic sexual deviant who fiddled while Rome burnt and who had to have his freedman kill him because he didn’t have the courage to commit suicide. But history is written by the winners and the Flavian emperors who succeeded the Julio-Claudians, of whom Nero was the last, had many reasons to blacken his name.

Now in this outstanding recreation of ancient Rome, with its treachery, rivalries and jealousies, where the answer to most problems is murder – judicial if you’re in power – Canadian lawyer David Barbaree presents a more than credible alternative view of the Year of the Four Emperors, the civil strife of AD 68 and 69 and the ten years of the rule of Vespasian, the tubby, near-plebian, ex-general who battled to stabilise an empire in danger of falling apart.

Between June of AD 68 and the December of the following year, Galba, Otho and Vitellius successively rose and fell before the accession of the founder of the Flavian dynasty. Social, military and political upheavals had Empire-wide repercussions. Barbaree paints a gripping and vibrant picture of Rome with all its plotting, brutality and corruption and takes a very different look at Nero.

Deposed and blinded, and helped by a terrified, illiterate slave boy, the former emperor escapes from prison to launch a campaign of revenge which provides the thread through a torturous morass of politics. Interwoven with this are the stories of the main players struggling to retain their grip on power. Vespasian’s son Titus, the brilliant general who crushed the Maccabean revolt in Judea, is obsessed by plots against his father. The Flavians usurped power, others seek to take their chance.

They seek support and funds where they can find it, often from unlikely sources, including an hugely wealthy blind senator from Spain, accompanied by his angry young ‘nephew’ Marcus. As Barbaree, ever the cautious lawyer, says, we don’t actually know what happened and all so-called history is merely hearsay and inadmissible in a court.

The appearance of several false Neros – no other emperor suffered such impersonators – leaves him a window of doubt which he throws wide open. Perhaps Nero lived. Perhaps his sufferings changed what we have always been taught about his unstable character. Perhaps he was never the monster he is portrayed as!

This ambitious, but successful meld of fact and fiction, is brilliantly written and cleverly engineered. Moving back and forth between an ailing Vespasian and the plottings at Nero’s court, it sets a believable framework for what follows. Told by several characters, always speaking in the first person and the present tense, their voices are distinct, clear and urgent. The narrators include Nero himself, Titus and Domitilla, his sister, plus others removed from the eye of the storm such as Calenus, a disgraced former soldier, and Marcus.

All their carefully developed and gripping stories build into a bafflingly complex plot full of conspiracy and surprise. These characters feel so real, with their fear, triumph and even sadness or moments of genuine tenderness giving a feeling of Rome at its most uncertain. If the premise of Barbaree’s story is fantastic, its delivery is accomplished and assured.