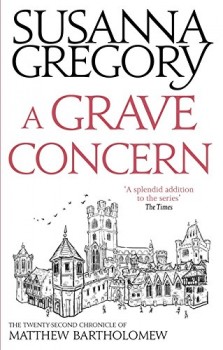 With passions over the election of a replacement for its murdered chancellor running high and a killer at large, physician/detective Matt Bartholomew and Brother Michael fear for the future of Cambridge University.

If Susanna Gregory produces more mysterious adventures for physician/detective Matt Bartholomew and Senior Proctor Brother Michael, she is in danger of doing a Midsomer Murders and killing of the whole academic and religious population of medieval Cambridge!

Meanwhile with the 22nd atmospheric and convoluted story of the series , the so-successful formula has been slightly changed with a living person – although he is dying and spending his last hours on his way to the university city trying to work out who has poisoned him to claim a rich legacy – opening the narrative.

Gregory also pays rather more attention to some of the previously less publicised characters, giving more prominence to people like tough soldier/sheriff Dick Tulyet and the book is all the better for that. Firstly, the chancellor of the university loses what is popularly believed to be a public battle with Satan. But this is not the only challenge facing Matt. Many of his patients have been made worse by the ministrations of a barber/surgeon recently arrived in the town; the mason his sister commissioned to build her husband’s tomb is cheating her; and his friend and collaborator Brother Michael has been offered a Kentish bishopric.

As rival colleges, hostels, let alone the different religious sects compete against each other, Michael is determined that the new chancellor will be a man of his choosing and he will leave the university in good order. The contenders for election threaten to get out of control. The death toll mounts. Someone is going to extreme lengths to manipulate the competition. The very future of the university is at stake.

At the same time the city is hosting one-time royal favourite, the crooked and murderous Sir John Moleyns, his wife, Egidia, and lawyer Inge. He, too, meets a mysterious end, which fuels a growing battle between two sets of funerary masons and engravers for what should be a big commission.

Add to the list of suspects the intellectually arrogant Kolvyle, Michaelhouse’s newest Fellow; the unattractive fundamentalist Hopeman who speaks directly to God; a drunken vicar; the secretive envoy of the Bishop of Rochester; the masons and engravers; and a couple of local criminals; throw in a series of thefts of funerary embellishments and it is not difficult to see how the joint investigation by Matt, Michael and Tulyet becomes confused.
As the body count mounts and the day of the election nears, Matt gradually comes to realise that he has been following a set of ‘clues’ designed to lead him astray and that there is actually more than one killer at large.

In a barn-storming conclusion, with all the villains receiving some form of summary or divine justice, everything is resolved. Gregory could never come across anything like this during her time as a Leeds police officer, but motivations remain unchanged across the centuries and it is how she weaves real historical events and people into the presentation of her tangled plots, that makes the Bartholomew Chronicles so riveting.

As always, 14th century Cambridge and the Fens provide a realistic, beautifully portrayed and chilling background – and there’s an undeveloped sub-plot. Mathilde, the woman Matt has always loved, but about who, after years of separation, is now unsure of his feelings, is returning to Cambridge. If they wed, he must leave his post at Michaelhouse, where Fellows must be bachelors – and you’ve got another facet certain to feature prominently in his next adventure.