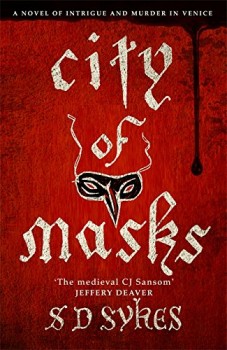 Oswald de Lacy, Lord Somershill, is in Venice on a pilgrimage to the Holy Land. On a night of carnival, he finds a dead man and is plunged into the secrets and intrigues of the City on the Sea.

Oswald de Lacy, the unwilling Lord Summerhill, on the long, dangerous and expensive pilgrimage to the Holy Land, is delayed in Venice which is under siege from a Hungarian Fleet. In this story, the third in the series, SD Sykes takes a huge gamble in moving her young and uncertain hero from the familiar ground of Kent. But it is one which succeeds as she blends a detailed immersion in place and period with clever and sophisticated plotting.

Oswald, together with his quite dreadful but occasionally useful mother, is lodging with an elderly English merchant with a violent past and a young and beautiful wife. The troubled young lord is trying to flee the shadow of the dreadful death in childbirth of his own wife, and soon falls under the influence of the merchant’s decadent grandson and samples the dubious pleasures of the City on the Sea, where East meets West and practices the vices of both.

On the night of the traditional carnival of Giovedi Grasso, the last Thursday before Lent, he escapes the nightmare of masked bawdiness –  and finds the mutilated body of a young man on his own doorstep.

Oswald is dragged into a murder investigation that takes him deep into the intrigues of this mysterious and paranoid city-state, where everyone watches each other and no one is what they seem, and he soon attracts the attention of the feared Signori di Notte. This group of aristocratic, self-appointed vigilantes is determined to protect the city’s morals by publicly burning homosexuals and executing adulterers. Oswald quickly learns that he is not the only one with something to hide among Venice’s waterways, palaces, vice dens and dungeons.

The story, with its increasingly intricate plotting, works well as a standalone. There are enough references to Oswald’s back story to offer clear insights into a past that so bedevils him in periods of troubled melancholy. It is peopled with colourful characters. Apart from his ageing, hectoring mother, a clever and comedic caricature of an English woman of a certain class and type, there is a cast of others, most if not all with something to hide.

But it is Sykes’ outstanding portrayal of the Venice of 1358 which makes such a fascinating setting for a mystery, with its melting pot of nationalities, narrow streets, canals, political intrigue, spies and masks. She manages to stay true to the period while avoiding the trap of the libertarian modern conscience that so often wrecks the medieval historical novel.

The refuge from invaders which became the greatest commercial trading centre in Europe and the only Italian city-state never to be dominated by one family, its people no matter what their class united by their devotion to their home is, in its pre-Renaissance days, the ideal setting for this clever and original story.