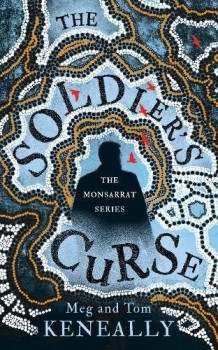 Gentleman convict Hugh Monserrat must solve the murder of the young wife of his penal colony’s commandant to save the life of his friend, falsely accused of the killing.

The first of a trilogy from Meg and Tom Keneally, an Aussie father and daughter writing team, introduces a totally different kind of detective, while at the same time exploring with perception and wit the forces that shaped a nation.

Hugh Monserrat, a self-made gentleman convict, sentenced to transportation for forging a barrister’s certificate to give himself the position his intelligence and education deserve, hungers for freedom. In the Port Macquarie penal settlement for second offenders – his term has been extended after falling foul of an obsessed clergyman – he has earned the position of trusted clerk to the camp’s commandant.

Not long after the officer heads into the outback in search of a so-far unmapped river, his beautiful young wife falls ill with a sickness the settlement doctor cannot identify. When she dies, it becomes clear she has been slowly poisoned. Monserrat and the couple’s illiterate, but perceptive Irish housekeeper Hannah Mulrooney, become suspicious of  the camp’s brutal and obsessive second-in-command. When he has Mrs Mulrooney arrested for murder, Monserrat must unmask the real killer to save his friend from the hangman.

The story weaves literary, historical and crime fiction together with engaging characters, fascinating period details and some thoughtful exploration of socio-political themes. It’s a smart, funny, cleverly researched tale with Monserrat, dapper in his waistcoat and cravat, both believable and likeable – and in many ways the perfect amateur gentleman detective for the emerging colony of New South Wales. He straddles mythology and grim reality, has the knowledge and background of a gentleman, the guile and cunning of a convict, and an adventurous, even reckless, streak, which he describes as his Shadow.

The complexity of connections between Aborigines and Europeans, convicts and jailers, all victims of their forced conjunction, are rendered with considerable empathy for misunderstanding, inequality and their costs.

Booker Prize winner Tom Keneally, who took the 1982 award with Schindler’s Ark, later filmed as the Oscar-winning Schindler’s List, already has an outstanding historical fiction pedigree. Three of his other novels were also Booker-listed. He’s now working with his former journalist and radio producer eldest daughter, and the pair are proving their ability to dredge history to distil and portray elements of the Australian personality – both mythical and real.

These skills bear fruit as they depict the infant township of Port Macquarie, the complexities of life in a slowly emerging colony, and launch Monserrat and the worldly-wise Mrs Mulrooney into what promises to be both a troubling future – and a real entertainment for readers. It may read at times like Jane Austen meets Lord Peter Wimsey, but make no mistake, the father and daughter duo have hit on a real winner!