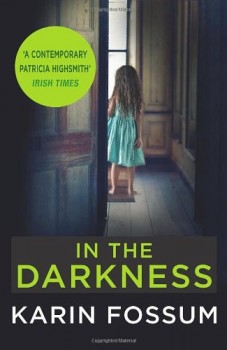 Eva is walking by the river with her seven-year-old daughter when they discover a man’s body. She leaves the girl telling her she will call police – then rings her father instead. Why? Inspector Sejer and his team must catch a violent killer, but face a cold trail.

Struggling artist and single mum Eva is walking by the river with her seven-year-old daughter when they discover a man’s body. She leaves the girl at the scene, telling her she will call police – then rings her father instead. Why? Inspector Sejer and his team face a cold trail if they are to catch a violent killer.

The key to Karin Fossum’s success is the sheer ordinariness of her characters. You believe in them because you already know them. Konrad Sejer himself is no dashing young gun-toting Holmes. A middle-aged widower possessed of no brilliant detective brain, he may talk to his oversized dog, but exudes all the character traits you would want in a copper – a commitment to justice allied to a refusal to accept defeat, and balanced by sometimes surprising intuition and kindness.

But before you think at this is some Scandi Dixon Of Dock Green, read on. Without being upfront noir, it’s powerful and dark enough, beautifully crafted and ultimately believable.

Fossum’s writing is never flashy and she ignores the usual parade of angst and sheer grimness I’ve come to associate with the genre. There are no author’s tricks, no great cliff-hanging chapter endings, no implausible leaps of imagination. What you get is a story with characters who feel like real people living in a real world, with real problems and real failings. Even their flaws and frailties, described with real insight and often a wry warmth, contribute to the overall picture she so lovingly paints.

This clever, sympathetic – and above all believable story – is one of the highest crime pedigree and although some fans of bloody murder, thrilling chases and staged showdowns might find it a little short on action, a real pleasure to read. Sejer is a new name on my detective horizon, but one I would like to see a great deal more of.