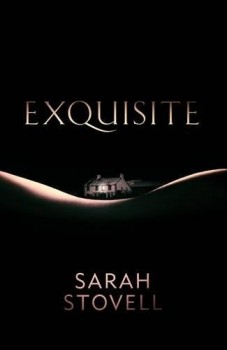 Bo Luxton, a successful author, has moved her family from the bustle of Oxford to the wilds of the Lake District. It may not be everything that her husband Gus cherishes, but surrounded by nature, it is an idyllic life.

Alex Dark’s existence could not be more different from Bo’s. She believes she wants to write, but is making little headway. Tied to a waster boyfriend, and with an inability to hold a job down, life in Brighton is passing her by.

However, Alex has a gift, which Bo recognises when she reads the young woman’s writing in a pile of submissions for a writer’s retreat. Then they meet, and in moments they know. The stage is set for something beautiful. Or utterly evil.

Oh, give me psychological thrillers by the suitcase –  particularly ones that are as beautifully written as Exquisite. Stovell may be a debut author, but I would bet my last penny she has been honing her gift for years before throwing this little gem into the public arena. She knows how to satisfy her audience with an abundance of obsession, atmosphere and twists, to say nothing of a forbidden love plot. And she knows how to write. This book, with its delectable prose, lacks pretension, and is accessible to all.

Although there is a scattering of introspections from ‘a person’ in one of Her Majesty’s Prisons for Women, somewhere in Yorkshire, the bulk of the chapters slide between Bo and Alex. The voices of the characters are, most of the time, quite distinct. In fact, I would say their individual syntaxes paint beautiful, convincing pictures of the Bo and Alex that Stovell is aiming to portray, and sit perfectly with their disparate ages and milieus.

The two women are, in the early pages, rather stereotyped; the successful author and the aspiring writer. But don’t be fooled. Stovell has taken Alex and Bo and twisted them into something unique, believable, multi-faceted – and disturbing.

Bo’s husband, her children, and Alex’s boyfriend are less three dimensional, and came across as props to the plot; they are, in this enlightened age, the only reason the plot can be described as a story of forbidden love. But I would like to have got to know them a bit more.

Despite a lack of sex scenes, this book oozes the sensual with a maturity that would appeal to women of all ages (though I don’t think I would leave it on my coffee table for Great Aunt Mildred to find!) Do not think Fifty Shades Of … this is mouth-wateringly shocking, yet subtle and in a class of its own. And I see it working well on screen. Stovell shows her readers that a careful selection of words, an unobtrusive backstory and a brilliant plot creates a fast-paced, tightly-packed page-turner with an ending that I can only describe as outstanding.