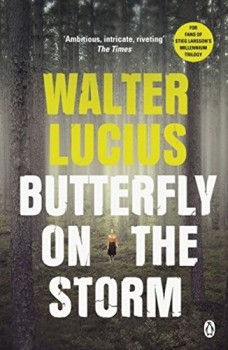 Butterfly on the Storm

A young Afghan boy is found in the woods outside Amsterdam, apparently a victim of a hit-and-run. Journalist Farah Hafez realises that he speaks her native language and decides to investigate the events that led to the accident.

One night a young seriously wounded Afghan boy dressed as a girl becomes a victim of an apparently ordinary hit-and-run accident in an Amsterdam forest. Danielle Bernson, the first doctor at the scene, saves his life. When she learns that he was also a Bacha bazi dancer, a boy for rich men to play with, she tries to deal with her own past of helping, and failing, children in war zones. She wants the world to know of this atrocity but as a result puts the boy in more danger.

Farah Hafez fled her native Afghanistan at the age of nine, following the murder of her father, the minister of foreign affairs, and then the death of her mother. Nearly 30 years later she works as a journalist for the Dutch newspaper AND, and has somewhat maverick tendencies. She is still haunted by her traumatic past and constant feeling of being displaced, and immediately connects with the boy when she happens to be in the hospital at the same time, and becomes emotionally involved. Though she’s reluctant to confront her own trauma, she manages to convince her editor Edward Vallent to let her follow the story.

Two police detectives assigned to the case are constantly one step behind Farah, and their own relationship – one is a hero Moroccan and the other a learner Italian sidekick – keeps suffering from various setbacks which only become obvious as more details of the powerful international criminal network emerge, eventually leading to a truly despicable Russian oligarch Valentin Lavrov.

Away from the main investigation is Paul Chapelle, born in Kabul, son of a Dutch artist and an American journalist Raylan Chapelle who had died on duty as a war correspondent in Cambodia, and whose writing hugely influenced both his son and Farah. Paul, thriving on danger and fighting for justice whatever the cost, is summoned from Johannesburg by Edward to assist with the investigation into the injured boy. Paul and Farah share a complicated emotional history and eventually both end up in Moscow.

The story is told mainly by four characters – Farah, Danielle Bernson, Marouan Diba and Joshua Calvino – and we can see how they deal with injustice, authority and their own feelings, which is a great method to keep the narration going. Acting on impulses and being tied to decisions made by others is another device to move the plot forward. Additional characters keep appearing and occasionally bring too much detail to the whole rich background of organised crime, corruption within international networks, and the very current theme of press manipulation.

Walter Lucius, the pseudonym of screen writer, director and producer Walter Goverde, cannot hide his fondness for Farah and paints a picture of a strong and conflicted woman, though prone to aggression which she tries to channel through mastering martial arts. Butterfly on the Storm, his first instalment of The Heartland Trilogy, translated by Lorraine T Miller and Laura Vroomen, offers cinematic sweep and a far-reaching tense international thriller moving between Holland and South Africa, as well as covering the past stories from Kabul. It’s gripping, fast-paced and, apart from the main theme of abuse of children and their suffering, very entertaining.