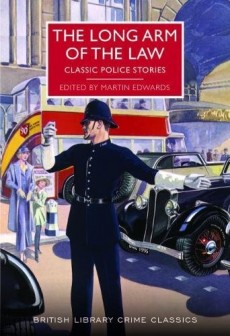 The Long Arm of the Law

CWA chairman Martin Edwards introduces 15 short stories by some of the great novelists from the golden age of crime writing.

Martin Edwards, series consultant for British Library Crime Classics and the editor of six previous anthologies, introduces readers to some neglected gems of British crime writing as well as lesser-known stories from the great novelists of the golden age.

In this anthology, the prolific chairman of the Crime Writers’ Association and president of the Detection Club, concentrates of the work of the professional policeman.

Classic crime fiction is usually associated with the brilliant amateur sleuth such as the unforgettable Miss Marple, Sherlock Holmes, Father Brown, Poirot, Campion or Lord Peter Wimsey. But writers from the time of Dickens and Wilkie Collins saw the value of the establishment of a detective department at Scotland Yard in 1842. Professional detectives gradually emerged from the shadow of Holmes’ hidebound, unimaginative, and frankly dense Inspector Lestrade to take their deserved place in popular fiction.

And there were plenty of outlets. As well as specialist magazines, most newspapers and periodicals regularly featured short crime stories, which provided authors with a useful source of income while they were writing full-length works.

Among the authors featured in the anthology are Freeman Wills Crofts, Nicholas Blake, George R Sims, John Creasey, Henry Wade, Laurence Meynell and Edgar Wallace. Each of the stories combines realism, in varying degrees, with entertainment, blending the conduct of a criminal investigation with a murder-mystery plot.

There are also some almost unheard of gems. The opening story The Mystery of Chenholt, by Alice and Claude Askew, a married pair of co-writers, serves to emphasise what a loss it was when both were drowned when their ship was torpedoed by a German submarine in 1917. It features PC Vane, MA, a policeman “of birth and education” – which would have come as a surprise to many pre-First World War readers, but which foreshadowed the university-educated fast trackers, now so derided by many officers and most noir writers – and his intrepid and equally intelligent fiancée Violet Grey.

Other standouts include George R Sims’ The Mystery of a Midsummer Night in which his Detective Inspector Chance pursues the killer of a four-year-old boy taken from his bed, his throat slashed and his body hidden in the vault beneath a disused outhouse. If the tale appears familiar, it is clearly based on the real-life Road Hill House murder of 1860, the most famous case of Inspector Jonathan Whicher, for which he was soundly criticised, but proved right when the killer finally confessed.

My favourite is Gerald Verner’s The Undoing of Mr Dawes in which the heavyweight, but nimble-minded, Superintendent ‘Rosebud’ Budd fools a major fence and crime arranger in a style which would have gone down well in The Sweeney or Minder!

Leonard Gribble, Carol Rivett, writing as ECR Lorac, and Nicholas Blake all contribute ingenious and entertaining entries, Blake’s, in particular, is a fine example of saying a great deal in a very few words. I prefer Crofts and Wade in their full-length novels and was more than a little disappointed by Edgar Wallace, Gilbert and Gil North.

But overall this is a fascinating collection, with Edwards contributing much fascinating biographical information, and it’s a great guide to the significance of procedurals on the development of crime fiction and the importance of police officers to the golden age of detective fiction.