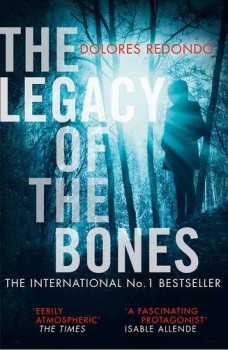 The Legacy of the Bones

by Dolores Redondo (translated by Nick Caistor and Lorenza Garcia)

Inspector Amaia Salazar returns to the valley of her birth in Spain to tackle a chain of murders linked by the severed arms of the victims and the one-eyed mythical tarttalo.

Inspector Amaia Salazar is living in Pamplona with her American artist husband James and newborn son Ibai, when she is brought back to Elizondo, where she was born, to investigate the desecration of a church. The bones of an unbaptised child, a mairu-beso, left in the church links the crime to superstition in the Baztan Valley, and the agotes, for centuries a persecuted minority.

Salazar is also following up on a series of murders of women by their partners, who then commit suicide. A connection is eventually established – before dying all have left a message, the word tarttalo, a one-eyed creature in local mythology. Further investigation shows that an arm was severed from each of the victims after death; a shrine is found in the forest with the arms, some of which show bite marks.

As with the first in this series, The invisible Guardian, Salazar struggles with misogyny from her colleagues, although she is getting better at coping with it. Salazar is the strongest of several strong female characters, including her sisters and her aunt; most of the men are weak in comparison. Her mother, having attempted to kill Salazar last time out, is incarcerated in a mental institution, but still manages to be a threat.

Repeated damage to the church and the characteristics of the remains left there eventually establish a link to Salazar herself, and to the murders. It becomes apparent that the deaths were co-ordinated by someone who besides having almost supernatural powers of persuasion has a particular grudge against Salazar.

The macabre aspects of the deaths and the personal nature of the threat are rather reminiscent of Patricia Cornwell. Salazar’s ability to combat the prejudice of a male-dominated society with intelligence and mental strength is also attractive, although male readers may perhaps feel some sympathy for her husband, who is given little doubt as to who wears the trousers.

The details of the traditional beliefs of this corner of Spain are also of interest, such as itxusuria, burial in house plots of children who died before baptism, and therefore did not qualify for inclusion in a graveyard. What one character describes as ‘mystical drivel’ may, however, not be universally appreciated. Salazar interacts with spirits in ways which cannot be wholly accounted for as dreams, and some will find this a mite too fanciful.

However, the protagonist grabs the investigation by the scruff of its neck and energetically drives it to a conclusion, there is plenty going on from the first page to the last and the setting is exotic enough to give this series a distinctive flavour.